“Does it really matter if you are married? I mean everybody knows you are together and you love each other, so who cares about a piece of paper?”

These are the words said directly to my face recently by someone who shall remain nameless. I don’t want to embarrass said person on this blog but I also believe nameless is not alone in this conclusion.

This blog is about the health and wellness of dogs and that includes the well being of dog moms and dads. After all, if your emotional, mental, and/or physical health is jeopardized, this both indirectly and directly affects your dog.

The Reality of That Paper

I’ve fought long and hard for a marriage license. I’ve held my breath when it came close to being legal for me to get married and then I sadly exhaled when my rights were denied. Over and over and over. So when June 12, 2014 came along and the words “I do” were legally uttered aloud, I hoped and prayed then, as I do now, that those who lived on this Earth and were denied their marriage rights could hear me loud and clear.

I am a dog mom, dog lover, dog writer, dog blogger, my heart beats dog™, and I am finally married. I despise labels in the same way most folks do. No one wants to be judged for one aspect of their overall being. When you meet someone and the topic of marriage comes up, do you ever ask if the marriage involves a same sex or opposite sex partner? For the love of all things good in this world, you don’t, right?

It shouldn’t matter who we are married to as long as the marriage involves two consenting happy adults who both chose to be in that formal union as a solidification and proclamation of their love, both to each other and in the eyes of the law.

That law thing is where it gets funky.

I Write for Rights

If you missed it, I married my long-time significant other. I don’t like calling her my partner because it’s too business sounding. I feel like a scene out of Fifty Shades of Grey to call her my “lover” because she is so much more than that. And to say she is my “girlfriend” does not accurately describe Darlene. I married my long-time significant other on June 12, 2014.

I can still get married on a Sunday and fired on a Monday for being gay in the state of Pennsylvania. It’s the law.

In her recent article for the Huff Post, writer Brynn Tannehill, shared, “LGBT Americans live in one of two distinct political environments, with very little in-between. We are either full citizens, or are left completely at the whims of the multitudes who would do us harm.”

I fall into the “L” portion of the LGBT reference, and I do feel the heavy weight of those who would prefer to do me harm.

There is no shame in who I am: That’s where the whole “pride” notion comes into play. I am very proud of being who I am and being made this way. I believe in God and worship spiritually but I do not believe a book written thousands of years ago should be used to grant nor deny my rights. Besides, that’s not very Godly. I abandoned the Catholic religion which I was raised with when I was in my 20s. I want to be worship with those who practice what they preach and I just didn’t feel that to be the case. Well that plus women aren’t held in the highest regard either.

I have nothing against those who worship but I do have a problem when that worship oozes into my rights and my life. 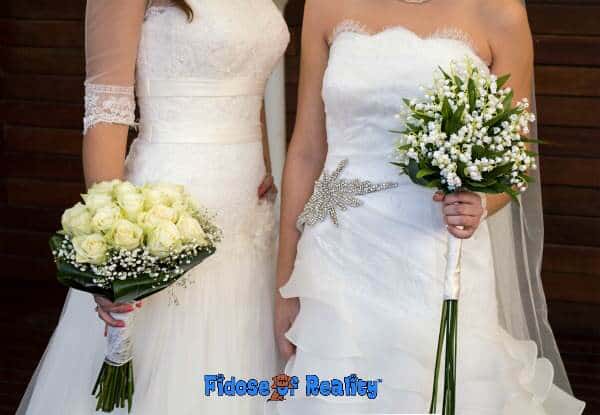 Miles to Go Before We Sleep

In the same article, Tannehill writes, “The result of this widening gap will be an America where more than half the country can marry the person they love, but also be fired, denied housing, refused health care, denied service, and refused public accommodations because they got married in the first place.”

Think about that: I am living the life where I am true to self, happier than I’ve ever been, I no longer live behind a facade, and yet I can be so vehemently discriminated against that my life is made a living hell for being who I am?!

What the hell is wrong with this picture?

Some states are nullifying anti-gay discrimination ordinances. Seriously, the very protections in place to protect folks who identify as LGBT are being legally dubbed “nope” by a select number of states.

Some bills allow for states to ignore civil rights laws if the state feels like doing so. Seriously, this means the people and businesses can refuse services for folks like me under the “religious freedom” bill passed in Georgia.

In Oklahoma, a bill to ‘pray away the gay’ died in the state House recently. The bill was introduced by anti-gay legislator Rep. Sally Kern in early 2015. In the bill, Kern sought to ensure that any parent who wanted their children to undergo “therapy” to change their sexual orientation or gender identity would have the right to do so, according to Advocate. com.

Wait, there’s more: An Oklahoma Democrat introduced an amendment to another anti-gay bill. Called the “Oklahoma Religious Freedom Act,” it specifically would require that: “no person be required “to participate in any marriage ceremony, celebration, or other related activity or to provide items or services for such purposes against the person’s religious beliefs.” This means businesses and charities could legally refuse to serve LGBT clientele.

A California lawyer proposes punishing homosexuality by shooting people in the head.  I can’t make this stuff up. Read for yourself.

I could go on and on, but a whole lot has happened since June of 2014 when I finally and legally got married, and the above is just a sampling of the hate.

These are scary times.

I am proud. I am out. People know. I don’t introduce myself as Gay Carol any more than you introduce yourself as Straight Marie (or any other name).

And the part of it that envelops me is loving, caring, giving, hard-working and continually feels like she has to defend herself and her character against hate-filled laws and abominations against my freedoms and rights.

I am a dog mom and this does matter.

At a recent press conference in Orlando, Florida, American Pet Products Association President, Bob Vetere, told the crowd that there are an estimated 79.7 people who own pets in this country alone.

A large portion of those pet owners identify as LGBT. I am one of them.

How Can You Help

There are things you can do to stop this madness. It is 2015 and there are days I wake up and feel like I am living in another century…one from the past.  No matter how you “identify” – whether gay, straight, bisexual, transgender, or lesbian (or something else I missed), basic human rights should not be denied. Hate-filled bills that discriminate behind cloaks of religion should not be passed.

Ask questions and have clear answers: There is so much speculation and false information floating around, especially in a cyber age. Here are a few resources you can bookmark and refer to if you don’t feel like asking someone in the know directly when it comes to LGBT issues. These sites are provided by PFLAG:

Gay and Lesbian Alliance Against Defamation (GLAAD): glaad.org
Out & Equal Workplace Advocates: outandequal.org
National Gay & Lesbian Task Force: thetaskforce.org
Speak Up: “That’s so gay” is not cool. I’ve begun calling people to task. When shopping in stores, I’ve actually asked someone not to use the term in my presence because it is offensive. Words can be harmful. Speaking up to stop words used as weapons takes a village. Speak out against statements and jokes that are disrespectful. 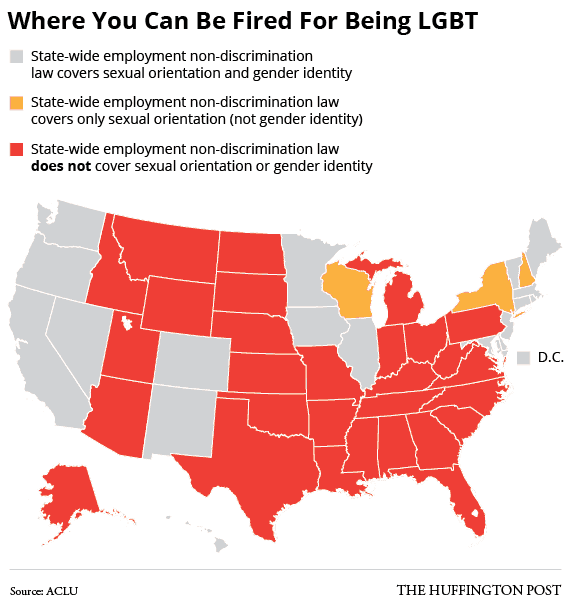 Vote: Take a stance at the polls. Let your voice be heard and help to keep anti-gay discrimination bills and representatives from moving ahead.

For those reading this who are straight, you might be thinking, “I could care less what your sexuality is; I just want to read the great dog content on your blog.” I don’t want to focus on this one part of me any more than you want to hear how straight another blogger is on his or her website.

I just can’t stay silent any longer. Not when bills are attempting to get through that negate me as a human being.

Not when several states allowed a person to be fired for being LGBT. As of this writing, there is no federal law protecting LGBT workers against discrimination based on their sexual orientation. Though some states and cities have passed their own protections, there are 29 states where a person can actually be fired for being gay. 29. A 2013 HuffPost/YouGov poll found that 69 percent of Americans think that firing people for being gay is illegal. These twenty-nine states shown in red above currently lack statewide laws prohibiting discrimination on the basis of sexual orientation. 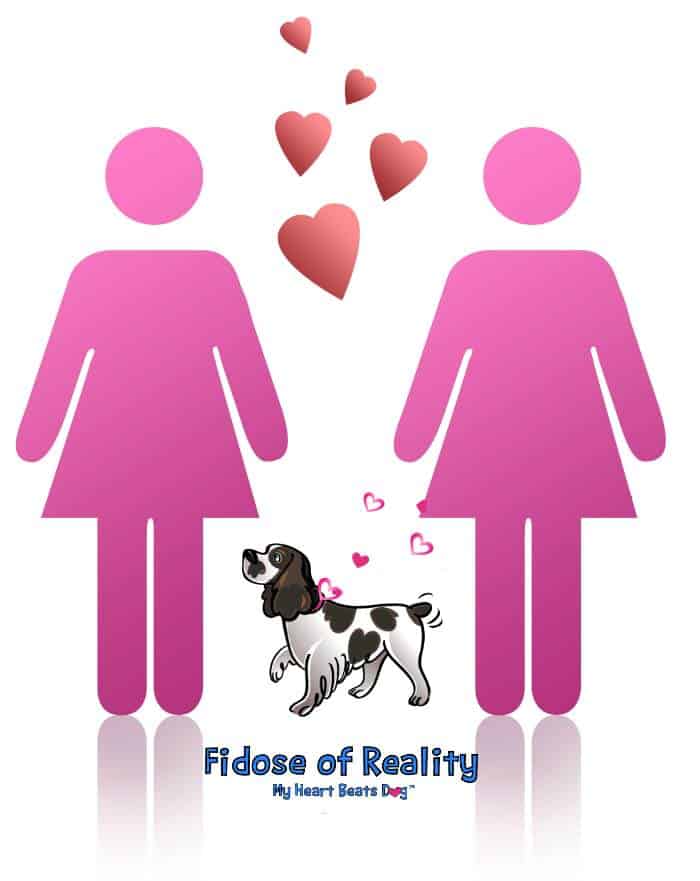 Aren’t we all afraid of those very same things in some way, shape, or form at some point in our lives? I honestly could care less who someone marries or has a relationship with as long as it is consensual and no one is hurt.  There is a portion of society that feels the need to judge and point fingers and chide, humiliate, pick on, harm, laugh at, and put down those of us who are not seen as their equals.

It really does matter and so does that piece of paper giving me the same rights as the millions of other married couples in this country.

I wonder why dogs don’t care about stuff like that. It is in those moments I am reminded why my heart beats dog™, why this blog is called Fidose of Reality, and why I will never stop being true to who I am ever again.

Ramifications of Coming Out as a Gay Mom with a Dog

My Dog Has Two Mommies

Misconceptions About Gay People and Dogs 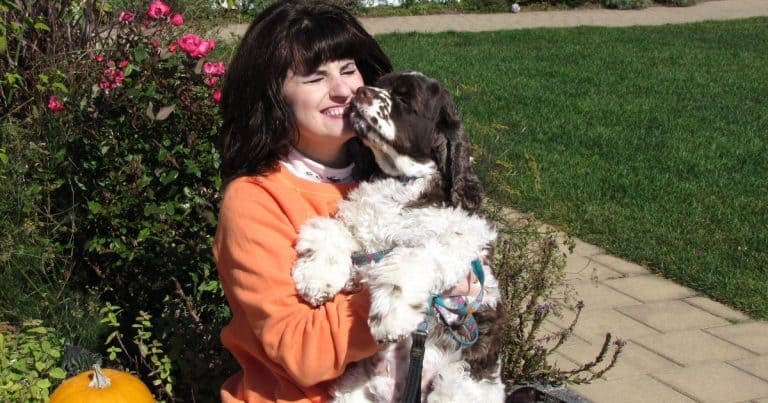 Since my dog passed away eight weeks ago, I’ve received several types of questions and messages. Caring friends and strangers offer their condolences, share their own path of pain, and extend words of… 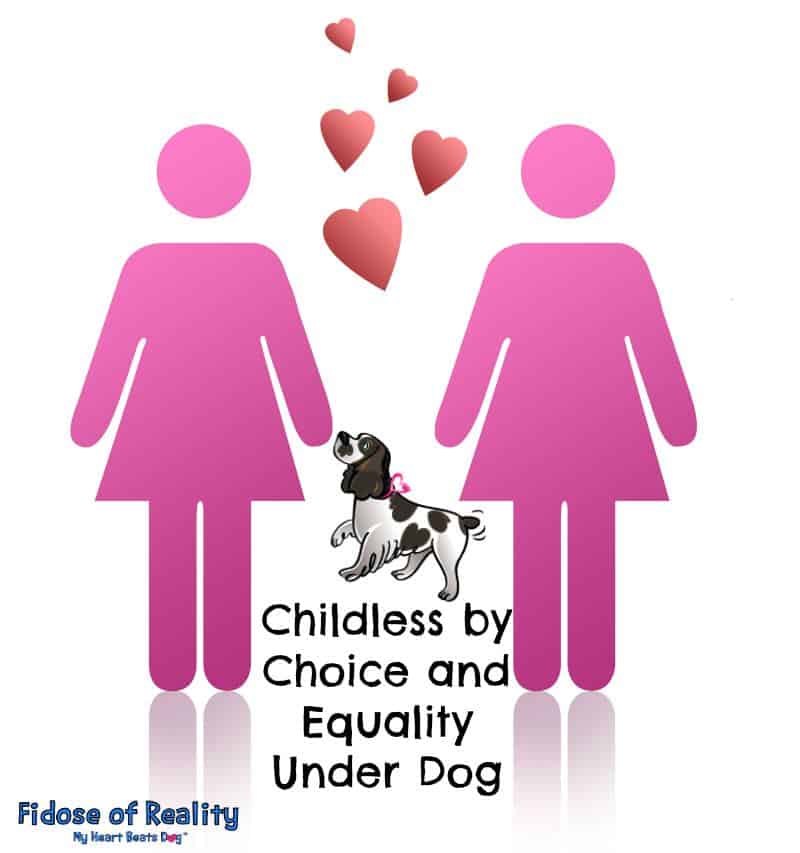 I never wanted kids but having dogs woke up a motherly, protective instinct I wondered about—as in “would I be a good mother?” Answer: Yep, I am a pretty damned good mom. In…

One of my favorite television shows of all time is about to end it’s run. After eight spectacular, slicingly fabulous seasons, Dexter the tv show will air its final episode on the Showtime…