Behold the pumpkin: It’s a seasonal treat and a year-round staple for many folks, but there are both powers and dangers of pumpkin for dogs. Here, we dispel some myths, go inside the great pumpkin, and share a Fi-dose of Reality when it comes to dogs and pumpkin consumption. 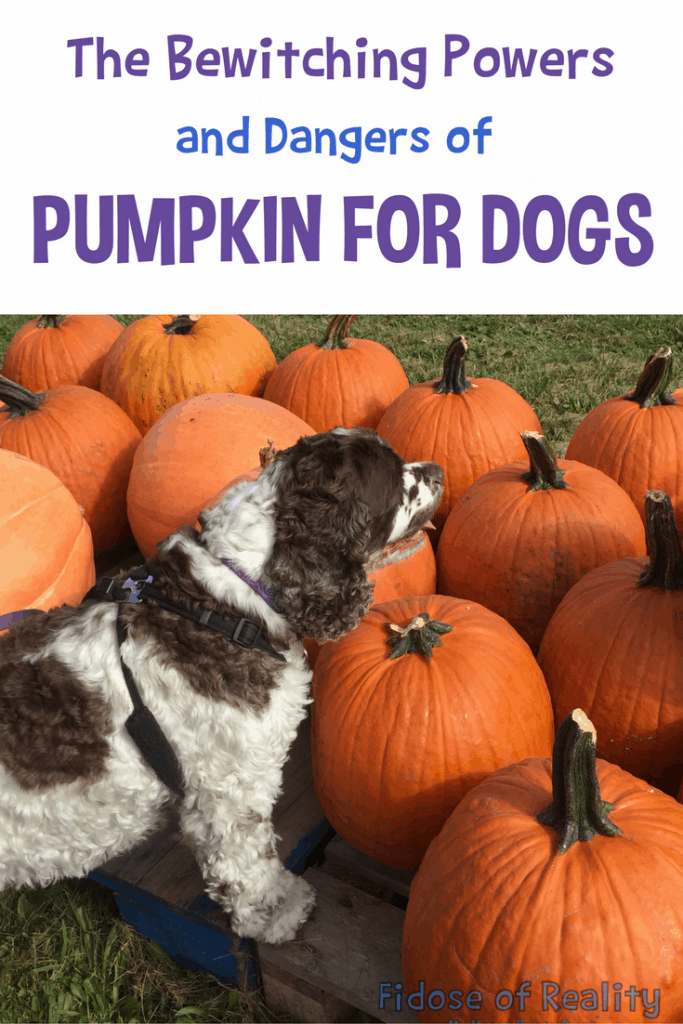 Do not give your dog sugary, spicy pie filling. Pumpkin that is suitable for dogs includes cooked, fresh, or the mashed kind from a fresh real pumpkin that you prepare yourself.

You should never give a dog pumpkin pie filling because it is rich in fat, sugar and other substances that can cause your dog to become very ill. Dogs cannot process spices and additional flavors intended for human consumption.

When my previous Cocker Spaniel experienced a flare up of irritable bowel disease, I occasionally would add a tablespoon of canned natural pumpkin to her meal. Before mixing it in and potentially seeing your dog turn his or her nose up at it, allow your dog to sniff and taste at the canned natural pumpkin. If your pooch isn’t into it, you’ll know ahead of time. For my dog, her indigestion responded well to the pumpkin now and then. Since IBS caused her stomach lining to become inflamed, the pumpkin seemed to help in cooling that process every now and again. Other times, it did nothing, but the disease was progressing.

We got to the point that adding a small amount of pumpkin to her diet would actually cause diarrhea, For dogs who enjoy the taste of pumpkin, dog parents should find a balance between stomach upset and smooth sailing in the bowel movement arena.

Natural canned pumpkin is rich in fiber, so proceed with caution in how much and how often you feed your dog.

Like people, each dog’s digestive system is unique, so while some dogs can tolerate a tablespoon of canned pumpkin now and then, others cannot. Use discretion and monitor your dog’s fecal output and consistency. 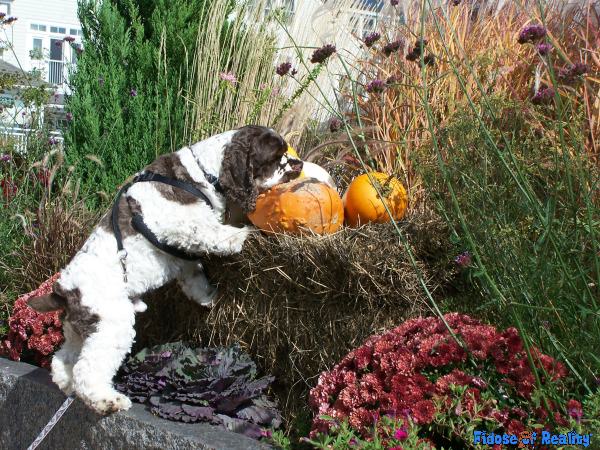 Too Much Pumpkin Can Harm Your Dog

We see recipes, articles, and pumpkin everything this time of year. Too much of a good thing can be a bad thing, especially for dogs. Pumpkin contains Vitamin A: Too much vitamin A can have a very negative effect on dogs.

According to the Merck Veterinary Manual, “The amount of vitamin A needed to cause toxic effects is 10 to 1,000 times the dietary requirements for most species.” Signs of vitamin A toxicity include nausea, anorexia, general malaise, tremors, convulsions, and yes, a dog can died from it.

What About Pumpkin in Dog Treats?

Since pumpkin is a very moist fruit, this is a good choice for dogs who aren’t big water drinkers. However, too much pumpkin can cause problems, as indicated above. Yes, you can feed most dogs dog treats that contain pumpkin, but even too many of those can cause digestive upset and stomach upset.

In our research for this piece, we found dog treat recipes with pumpkin that contained dangerous ingredients including pumpkin pie filling and sugar. Some recipes even called for pumpkin spice. While not dangerous, it can cause major stomach upset and irritate a dog’s sensitive digestive tract.

Pet Poison Helpline reports, “Pumpkin spice products are usually flavored with a mix of cinnamon, ginger, nutmeg, cloves, and allspice.  It is important to remember the small amounts of these spices added to flavor foods usually will not be toxic to pets, and the risk of toxicity is highest if a pet gets into essential oils or the spices directly.  Ingestion of very large amounts of cinnamon can potentially cause vomiting, diarrhea, lowered blood sugar, irritation of the mouth and lungs, and possibly changes in heart rate and issues with the liver.  Nutmeg contains a toxin called myristicin, and toxicity can cause symptoms including hallucinations, disorientation, increased heart rate, high blood pressure, dry mouth, abdominal pain, and possibly seizures.   Ingestion of large amounts of ginger can cause stomach upset and lethargy.  Cloves and allspice both contain a compound called eugenol, which can cause liver toxicity in cats.” 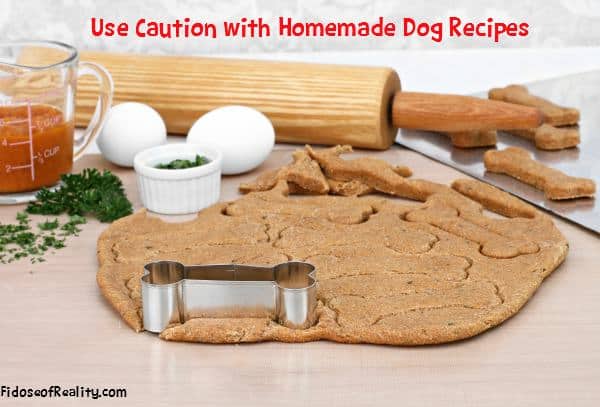 One of our favorite DIY pet bloggers is Kol’s Notes. We know she does her research and crafts recipes with safety to dogs in mind. Peruse her pumpkin treat dog recipes.

If you are like me and aren’t so savvy in the culinary department or you prefer to purchase treats for your dog, dispense to your pooch in moderation.

NEVER feed your dog leftover Halloween pumpkins. It may sound like common sense, but some folks believe that leftover pumpkins are safe. No, no, and no again. Not only is the pumpkin harboring bacteria, but chemicals and residue from the point of purchase may linger. Mold and bacteria are toxic to pets, not to mention any paints or decorations that adorned the pumpkin.

DO NOT allow a dog to eat or chew at a pumpkin stem. A Fidose of Reality reader recently asked if this would pose a problem, and to be blunt, YES! Stems and leaves from pumpkins are not for canine consumption. The choking hazard exists, and stems are very hard to digest, which can cause a severe intestinal blockage or worse. Dogs who have ingested a stem should be taken to a veterinarian immediately.

USE CAUTION with pumpkin seeds. We fear feeding anything to dogs that prevents a choking hazard. While pumpkin seeds contain protein, carbohydrates and fiber, do not feed the salted kind. Always check with your veterinarian before changing or adding something like pumpkin or pumpkin seeds to your dog’s diet.

While pumpkin seeds may be a natural remedy for parasites like tapeworms and roundworms, the amount to do so may cause major problems, especially if the seeds are improperly stored. We are of the why risk it ilk when it comes to pumpkin seeds.

DON’T give your dog human pumpkin-containing goodies like pumpkin pie, pumpkin latte, etc. The Pet Poison Helpline says the other ingredients in pumpkin spice foods are of greater toxic concern (caffeine, alcohol, rich ingredients in baked goods, and even the deadly xylitol)!

Are you feeding your dog anything with pumpkin? What’s your experience been? Let us know in the comments below!

Fidose of Reality, LLC is a participant in the Amazon Services LLC Associates Program, an affiliate advertising program designed to provide a means for website owners to earn fees by linking to Amazon.com and affiliated sites. As an Amazon Associate, the owner of this site earns a commission from qualifying purchases.
61shares