One of the first signs of colitis in dogs is diarrhea and bloody mucus in the stool. Canine colitis is a painful condition that should always be checked by a veterinarian. I know because we have dealt with the sudden onset of this nasty condition.

When my Cocker Spaniel, Dexter, showed signs of both blood and mucus in his stool, I knew we had an issue. A dog’s poop can tell you a lot about his health, so off we went to the emergency veterinarian. Here’s how my dog was diagnosed with acute colitis, why it happened, and ways to prevent the same thing from happening to your dog. 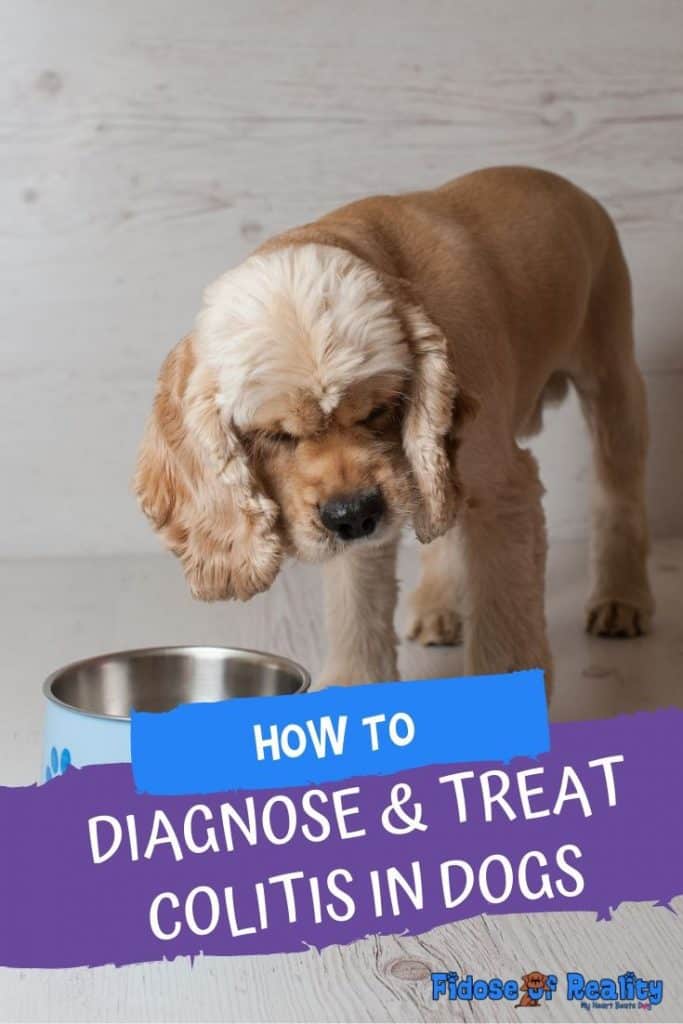 This post contains some affiliate links for which I earn a small income if you click through and purchase something on the links. Please see my disclosure policy for details.

Symptoms of Colitis In Dogs

When a dog’s colon, or the large bowel, gets inflamed, colitis may result. Often times, what the poop looks like is an indicator of what’s causing the trouble. Bright red blood can indicate canine colitis while a dark, tarry stool is generally not from the large bowel and may indicate internal bleeding. Either way, blood in a dog’s poop should always warrant a vet visit.

When my dog first developed signs of colitis, in addition to the bloody stool which had a mucus texture to it, he appeared to strain during defecation quite a bit. Sometimes he produced a bowel movement, but other times just a few driplets would come out that had a bright red tinge to them, as seen in the photo.

When you know what normal is in your dog, it’s easy to then act on “abnormal” when it happens. As a lifelong Cocker Spaniel mom, I know that one of the signs of stomach distress in dogs is they can’t sit still or their backs may arch. Dexter was walking fast during his need to evacuate his bowels, with very little result.

Some symptoms of colitis include:

When you eat something, it takes about 20 to 30 hours for food to make its way through a human’s gastrointestinal system. In dogs, the “transit time” is more like six to eight hours.

So while food moves faster through a dog’s intestines, it actually goes slower in the stomach than a human’s. On top of that, dogs produce more stomach acid than people, so in certain circumstances, the perfect storm produces an upset gut.

A dog’s digestive system is a lot like ours and also very susceptible to sudden dietary changes, worms invading it, stress, side effects from medications, food poisoning, and more.

What Causes Colitis In Dogs

Here are some of the causes that are commonly associated with this condition:

What I Did When My Dog Got Colitis

We visited the vet to confirm the diagnosis. Since the internal medicine vet Dexter saw first simply gave him a low-dose antibiotic based on symptoms, the colitis got somewhat better within 48 hours. When he was still straining to poop on day three, we saw his regular veterinarian.

Armed with a poop sample, Dexter’s vet did a complete blood count, fecal test, examination, and made the diagnosis of acute colitis.

This entire time, I logged all of my dog’s symptoms, bowel movements including color and consistency, snapped pictures, and wrote down what I fed him and how much he drank in his canine health journal.

As a diligent dog mom who prides herself on feeding the very best dog food, treats and paying close attention to supplements, what could have gone wrong?

Dexter is a fan of a certain marrow bone of which he receives twice a month. We toss the old one out and give him a new one. It satisfies a dog’s desire to chew while entertaining him because he buries it and treats it like the coveted prize it is.

I gave Dexter a new bone and later that evening, unbeknownst to me, my spouse gave him a second “new bone.” Dex buried the first bone, so out of sight and out of mind. See where this is going? He worked on the outer coating of baked treat and then to the middle of the bone, which is fine, but not in excessive quantities.

Add that to the stress of fireworks pre-holiday and post fourth of July, and it was the perfect scenario for colitis to rear its ugly head in my dog.

With intestinal parasites ruled out, our vet prescribed metronidazole to treat the inflammation of the large intestine, sucralfate to coat the stomach, and a probiotic to sprinkle on the food to help get his gut back in order. 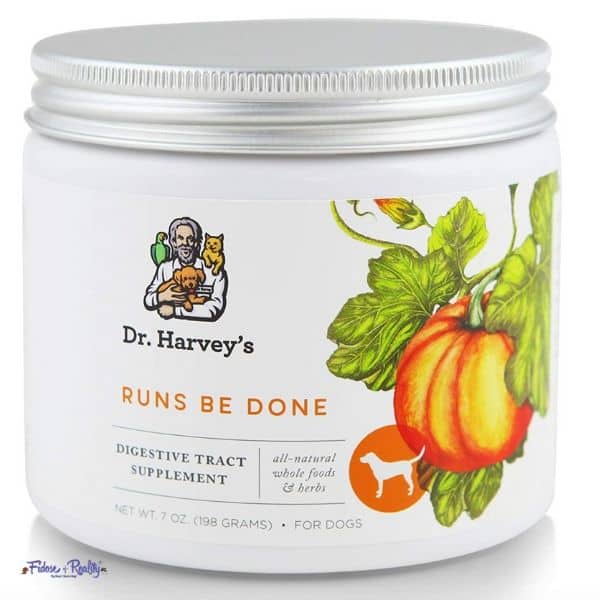 What To Feed A Dog With Diarrhea From Colitis

If your veterinarian has confirmed the diarrhea is from colitis, he or she will likely recommend an easy-on-the-gut diet for a period of time.

Drugs that suppress diarrhea don’t solve long-term problems, so it’s in your dog’s best interest to figure out what caused the problem.

Knowing what caused your dog’s colitis will help prevent it in the future, but if food is the culprit, an acute condition may become chronic. Think about a new car that you fill up with the wrong type of gasoline. Sooner or later, things will break down.

As we eased back into regular food, I added Dr. Harvey’s Canine Health to his lean organic ground beef, which I continued to boil for a week. A lot of dogs develop a hypersensitivity to dog food, so I took great comfort in feeding Dexter his “normal food” as his gut healed.

Dogs who relapse after antibiotics stop may find themselves in a vicious cycle. I know because my first Cocker Spaniel succumbed to complications of IBD. If the colitis returns, your dog may need further testing like x-rays, a scan, or even a colonoscopy. 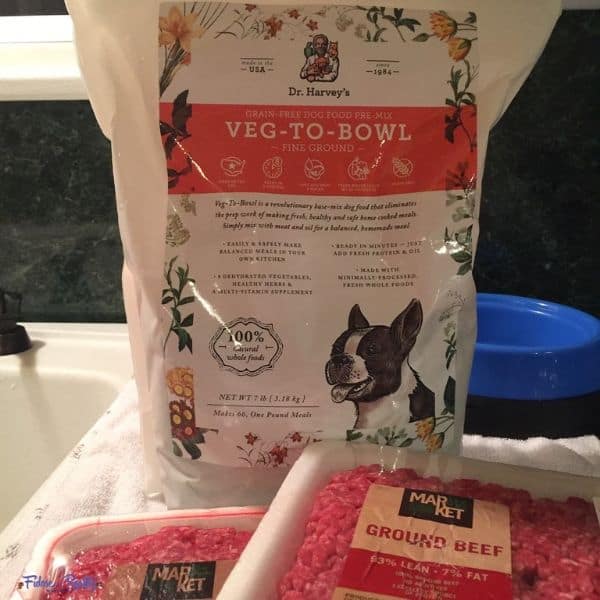 In most cases, if you can determine what caused the colitis, you can stop it from recurring. In our case, better communication on bone dispensing is in order.

In the beginning, I fasted Dexter for 24 hours under veterinary supervision but I made certain my dog drank enough water.

One of the supplements I had on hand and will never be without is Dr. Harvey’s Runs Be Done. I’m a mega-fan of the products, as you can tell. It’s nice to know they serve me well when called upon. It also felt good to tell the vet I feed my dog a whole foods meal and never wonder if something in the food caused his distress.

I am not a fan of commercially prescribed dog foods nor kibble in most cases, especially when a dog’s gut is under distress.

As far as supplements, toppers, and herbs for dogs with colitis, you’ll likely hear about increasing the fiber content for a period of time, adding a probiotic (which we did) since the gut is all out of whack, canned pumpkin (not the kind you use for pies), slippery elm, marshmallow, or calendula. All of these should be discussed with your vet as even “good supplements” can further stress an already overloaded canine gut.

While colitis itself cannot be spread from dog to dog or dog to person, whatever caused the colitis might be contagious.

For example, if your dog has kennel cough and is stressed out to the point he gets colitis, the kennel cough may be contagious. The same goes for dogs with worms. This is why it is always important to find out why it happened so you can protect other dogs in the household and prevent it from returning.

How Long Does Colitis In Dogs Last?

If overfeeding or an improper meal/garbage raiding is the culprit, it should not take more than a week in general for colitis to resolve under veterinary care. Dexter’s bowel movements, fecal consistency, and overall gut health took about a week to 10 days to get back to normal. However, I saw a difference in three days after starting medication.

Depending on the root cause of the condition, colitis could go on for weeks or indefinitely. Of course, a dog cannot survive with constant diarrhea, losing fluids, and having pain.

Ways To Preventing Your Dog From Getting Colitis

One thing I’ve used and recommend is the Nutriscan pet food intolerance and sensitivity test for dogs. If your dog has ongoing gut issues, itchiness, or any sort of suspected dietary sensitivity, famed veterinarian Dr. Jean Dodds patented this test.

You get a kit in the mail, easily take a sample of your dog’s saliva, mail it in and wait. Within a few weeks, you are notified of anything your dog should not be eating. If your dog struggles with colitis, IBD, or you have a healthy dog and are curious about what not to feed him, this test proved beneficial for us. Here’s an example page below of what the results look like. 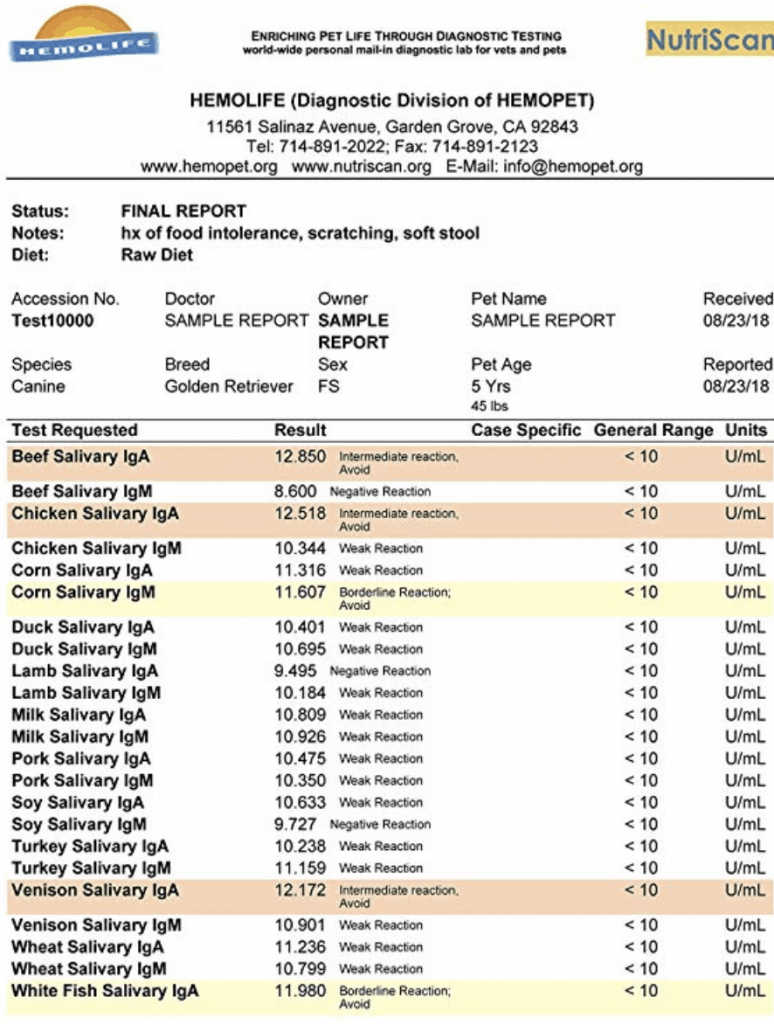 Knowing the causes of colitis will help you help your dog stay healthy and symptom-free. One thing I also advocate for is vaccine titers and not over-vaccinating your dog. Anything that puts added stress on the gut or immune system can lead to a variety of problems.

Feed a healthy diet that is species-appropriate and steer away from the lower quality dog food. Dr. Harvey’s has been a staple in our home and I firmly believe it helps my dog recover quicker when illness strikes.

Has your dog ever been affected by colitis? Let us know in the comments below.

Note: This post contains affiliate links from Amazon and Etsy, meaning if you click on a link above and then make a purchase, Fidose of Reality will receive a small commission with no extra cost to you. You help us keep the site up and running and in exchange, you get to shop for items you love. Wags!

Fidose of Reality, LLC is a participant in the Amazon Services LLC Associates Program, an affiliate advertising program designed to provide a means for website owners to earn fees by linking to Amazon.com and affiliated sites. As an Amazon Associate, the owner of this site earns a commission from qualifying purchases. This site also participates in other affiliate programs and is compensated for referring traffic and business to these companies.
15shares