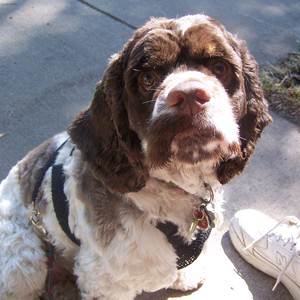 My dog was awarded Canine Good Citizen status by the AKC  and it happened purely on a whim. He never took a class to train for it, we didn’t practice the specific elements of the test previously, and only on prompting of family and friends did we decide to try it. The fee is $10 to test.

Though the status is awarded to the dog and honors the commitment of the owner to train the dog to be a “canine good citizen,” the series of elements involved are ones all dogs should know. Whether or not you decide to have your dog tested and aim for the title, check out these segments of the test and determine whether your dog would pass. I noted Dexter’s reaction to each as well and how he “learned” the behavior.

Normally there are no distractions in the vicinity when the dog is being tested. However, since the testing occurred at a very busy pet expo, there were a lot of distractions. With that, here we go:

1. Allow a friendly stranger to approach your dog and speak to you, the owner, in a natural everyday situation.

Dexter: He sat and stared lovingly as the tester talked to me.

How he learned: From the time he was a puppy, we exposed him to people, sitting in place, and letting people meet and greet him —from children to adults.

Dexter: He sat by my side as the tester asked if she may pet my dog. Dexter allowed petting on his head and body while the tester talked to him. No shyness or resentment displayed.

How he learned: We allowed people to pet him from the time he was a pup.

Dexter: Allowed the handler to touch his paws, head, ears.

How he learned: I brushed his teeth, touched his paws, and brush him daily. He also allows the vet and groomer to handle him.

Dexter: We were instructed to walk and turn left, then right, and do an about turn with at least one stop in between.

How he learned: Frequent walks in different environments.

5. Walking through a crowd.

Dexter: While on the leash, Dexter walked by my side through people who were having a casual conversation. No jumping or pulling on the leash.

How he learned: He travels with me and is exposed to crowds.

Dexter: Did sit and down  until the tester told me to instruct him to stay. I then was told to walk 10-15 feet away from Dexter.

How he learned: He actually learned this by accident at home. I wanted Dexter to know “stay,” so while in the house on cold and rainy days, I taught him.  I slowly increased the amount of space between Dexter sitting and my distance from him. Once I say “Dexter, come” command, Dex comes to me and receives his ball or treat as a reward.

Dexter: Dex stayed in place as I walked away. When the tester said to call him, I said “Dexter come” and my little boy walked right to me.

Dexter: Two people and their dogs walked by us. As we passed them, we exchanged hellos and how are you’s and kept walking. Dex was fine.

How he learned: Walking by other dogs and their owners in different situations: on walks, on trips, in the neighborhood.

Dexter: I had my concerns on this one. I walked with Dexter and the tester and she dropped a set of keys and then a clipboard onto a concrete floor. Dex isn’t fond of fireworks so I was concerned a loud sound would bother him. Nope. He looked mildly at the clipboard and kept walking. In fact, it appeared my boy shot the tester a cocker-tude look as if he were annoyed. *grin*

How he learned: He has been exposed to different situations and different people in his short 2 years.

Dexter: I figured he’d blow this one. He’s a mama’s boy and I am around him all the time, working from my home office, etc. I had to leave Dexter with the tester (I told him “sit, stay”) and then I was instructed to walk away. I had to stay out of sight for three minutes without Dexter barking or whining.

How he learned: When teaching Dexter “come” in my home, sometimes I would hide out of sight. He wasn’t allowed to “come” until he heard me say “okay Dexter, come” and he would get a treat as a reward. When he broke “stay,” before I gave the command, I would just take him back to the starting point and do it over. He learned fast. So we applied the same principle to this task. I held my breath. Dex did break stay but didn’t lunge forward, whine or bark.  Not til right after the tester told me to come back from behind the curtain I was hiding, at which point he whimpered a bit.

He made me so proud, and I knew he was a canine good citizen before this test. Seeing him in action and display the really cool “games” we practiced at home thrilled me. Positive reinforcement is key. Never yell or scold the dog for not doing a command. Practice makes near perfect and eventual perfection. Think like the dog and use treats and their favorite toys as rewards. When the dog does the command you’ve asked of them , throw a verbal party, i.e.: “Good boy, Fido, way to go,” clap and act like they just won Westminster. This is their moment. Do it times 10 and you too can have your Canine Good Citizen moment as well. My favorite moment came when the tester told me that my dog loves me and we have a very special bond together. Life sure is good.

Take one part Cocker Spaniel, add in a live television interview from beautiful Salt Lake City, mix with a hot topic (aka: BlogPaws 2012 social media conference), and toss in some chirping birds…

According to the ASPCA, prescription medications top the ASPCA’s List of Harmful Pet Toxins for 2011. What does this mean to pet parents? Of the over 165,000 calls the ASPCA’s Animal Poison Control…