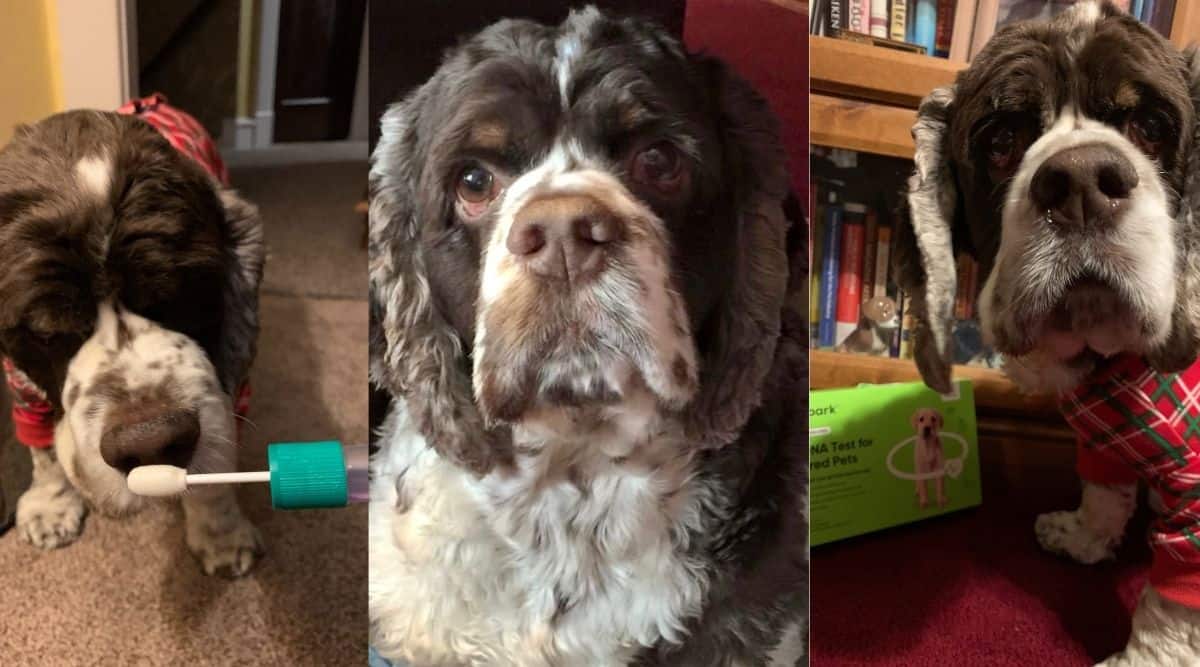 One of my canine to-do list items was performing a purebred Cocker Spaniel DNA test on my dog, Dexter. It was one of those things I never quite got around to doing until the universe gave me a gentle nudge.

I decided to try the Embark Dog DNA Test for Purebred Pets. It’s simple, requires one step, and gives dog moms and dads a more complete picture of their pet’s health. It screens for genetic health risks and can trace your dog’s breed and ancestry back to their great grandparents. You can share the results with your veterinarian and take proactive steps to support your pup’s overall health.

Waiting for dog DNA test results can stir up a mix of emotions, but nothing could have prepared me for what happened next. As I eagerly awaited the results, tragedy struck.

Our Cocker Spaniel suddenly and without warning crossed from this earth to the Rainbow Bridge. Dexter came into our lives, taught us about love, and left us with grief of epic magnitude. Living present tense grief with a past tense dog is devastating.

Even though Dexter left us before we received his DNA profile, I was still curious about what the results would reveal. Here’s what I learned about my beloved Cocker Spaniel and why I am grateful for this DNA test.

Disclosure: Some of the links in this article are affiliate links. As an Amazon Associate, I earn from qualifying purchases.

Maternal and paternal haplotypes were analyzed and the results were sent to me as part of the DNA testing. Through Dexter’s mitochondrial DNA, Embark traced his mother’s ancestry and his father’s ancestry back to where dogs and people first became friends.

On his mother’s side, Dexter’s haplotype is B45 which commonly occurs in breeds like Doberman Pinschers, Yorkshire Terriers, Cocker Spaniels, and village dogs in Costa Rica.

His maternal haplogroup is B1, considered the second most common maternal lineage in breeds of American or European descent. This is important because I know whence Dexter’s roots came. It is a common female line in Golden Retrievers, Basset Hounds, Shih Tzus, and half of Beagles.

For example, since Bichon Frise dogs are popular in Spanish culture, B1 is now a fairly common haplogroup amongst the village dogs of Latin America.

On his father’s side, Dexter’s haplogroup is A1a and his haplotype is H1a.14. The report goes into further detail as to the paternal lineage that led to the creation of my beloved boy.

Purebred dogs, like mixed breeds, have their share of health issues. Cockers are susceptible to a number of genetic health anomalies. Some of the many things Cocker Spaniels may deal with on the health spectrum include, but are not limited to:

In my 30+ years of Cocker Spaniel ownership, my spouse and I have dealt with everything from cancer to disc disease, cataracts to hemangiosarcoma.

The beauty of an Embark Purebred Dog DNA Test is having a health ally in your back pocket. Results of the test detail any genetic traits or conditions that may cause health issues for your dog down the road. It doesn’t mean those anomalies will surface — it does mean you can work in tandem with your veterinarian to be aware.

I’m the type of dog mom who wants peace of mind and a complete sense of my pup’s overall health. Embark makes it easy to do with a simple cheek swab.

Much like a human ancestry test, Embark’s DNA reveals if your dog has canine relatives in their database. Single-breed dogs often have many close family members.

By clicking on the ‘Relative’ tab of my official Embark DNA report, I noticed Dexter has many Cocker Spaniel family members.

Embark says, “Doggy DNA Relatives come from our geneticists’ analysis of your dog’s DNA, analyzing how much DNA your dog shares with another dog. The pups that you see today are the top dogs in Embark’s database, based on the percentage of DNA they share with Dexter.”

If I chose to do so, I could reach out through Embark’s connect system to contact their owners.

Embark is kind enough to offer sending a copy of the report directly your veterinarian if you choose this option.

Dexter was at risk for intervertebral disc disease (IVDD) type I. Ironically, he had arthritis in his spine and was receiving cold laser treatments in lieu of traditional medications.

Had I plan to breed Dexter as a stud dog, Embark made sure to tell me carries a variant known as skeletal dysplasia 2, SD2. This is important because although it didn’t affect him, his offspring could inherit this issue.

Additionally, Embark noted that Dexter’s ALT level may be low normal. This is a liver value which is tested as part of a dog’s routine blood chemistry profile. More specifically, they said:

“Dexter has one copy of a variant associated with reduced ALT activity as measured on veterinary blood chemistry panels. Please inform your veterinarian that Dexter has this genotype, as ALT is often used as an indicator of liver health and Dexter is likely to have a lower than average resting ALT activity. As such, an increase in Dexter’s ALT activity could be evidence of liver damage, even if it is within normal limits by standard ALT reference range.”

I find this fascinating because I had no idea his ALT could run low normal, which it always did. I know this DNA test is accurate based on findings like this.

The one thing I wish Embark or another DNA test kit company would offer is hemangiosarcoma testing and basically cancers in general. Is my dog prone to cancer? This would be life-changing.

Waiting for Results: The Unexpected Death of My Cocker Spaniel

As I waited for Dexter’s DNA results to come back, I started reading The Forever Dog book. The authors, Rodney Habib and Dr. Karen Becker, write about genetic testing in dogs. “The upside to these tests is that you can screen for more than 190 heritable diseases that have been identified in dogs via specific genetic disease markers,” the book says. The authors noted it is imperative for excellent breeders to use this test to continue to ensure dogs are well-bred and healthy.

The worst part about having a dog is the likelihood that you will outlive them. Dexter had just recently received a clean bill of health and was spunky, happy, eating, and playing. All that changed in the snap of a finger. He stopped playing, began breathing heavily, had pale gums, and did not want to move.

Sadly, it took us hours upon hours to find a veterinarian who would see us. Most emergency veterinarians were booked solid and had no room for us. Finally, at midnight on a Saturday, we found a facility three hours from home to take us.

After spending 18 hours in the hospital, with Dexter in intensive care and us in the lobby curled up sobbing on a bench, the dreaded news came. Our precious 13-years-young Dexter died from an undetected hemangiosarcoma (HSA). In his case, it was a sudden bleeding huge liver tumor.

Every person says they have a special pet. Every single person is right. Dexter was like a little sage on earth. Like a little Buddha, but he wasn’t a person. He was more of a wise soul who happened to take the form of a canine. He was a gift. As my wife has reminded me, love never ends.

I’ve been through the loss of a dog before, and I will again and again. The magnitude of our love reflects the enormity of our grief. We never saw this death coming. It was sudden, tragic, and unexpected, as is the case with evil, insidious cancers like hemangiosarcoma.

You can read more about our beloved Dexter and what happened in these posts: The Death of My Beloved Canine Hero and My Dog Died Without Warning from Hemangiosarcoma

How To Take The Purebred DNA Test For Your Dog

Simple. If I could summarize the sample collection process, it would be in one word: simple. You receive a brightly colored box to get the low down on your dog’s DNA.

Step 2: Swab your dog’s lower cheek pouches for 30 to 60 seconds (make sure he hasn’t eaten for 30 minutes prior.) Insert a swab into the tube, shake the tube.

Step 3: Place the tube into the provided and send it off to Embark. Track results via the Embark tracking link provided.

Waiting is the hardest part because I really wanted to know my dog’s genetic diversity and get even more proactive with his health.

It took about a month to receive the results. I received both a text message and an email to alert me that Dexter’s DNA profile was ready. I was able to access everything online.

If you are considering the Embark dog DNA test for purebreds, here are some standout features that I liked about it:

Where To Purchase The Embark Purebred Dog DNA Test

The Embark Dog DNA test is available on Amazon and Chewy.

Buy on Amazon
Buy on Chewy

I always knew our next Cocker Spaniel would come with Dexter’s blessing. Like all pet parents, you hope your dog lives a super long life. What Dexter lacked in quantity of years (he was a little over 13), he made up for in quality of life.

We know Dexter placed his pawprint blessing and sent us Alvin because:

Every pet parent needs and deserves the peace of mind when it comes to their dog’s health and heritage, and Embark’s canine DNA test can help paint a more complete picture. Here’s wishing your dogs a long, healthy, happy life. Love never ends.

A great soul serves everyone all the time. A great soul never dies. It brings us together again and again. 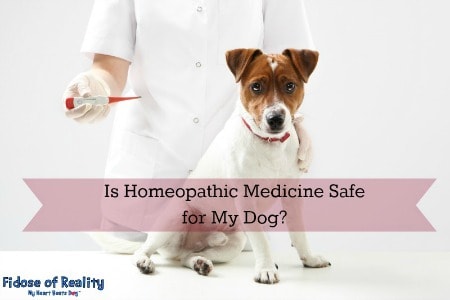 Modern veterinary medicine has its place in the treatment and care of dogs, but so does homeopathic medicine. You’ve probably arrived at this article because you are either: Curious about what canine homeopathic… 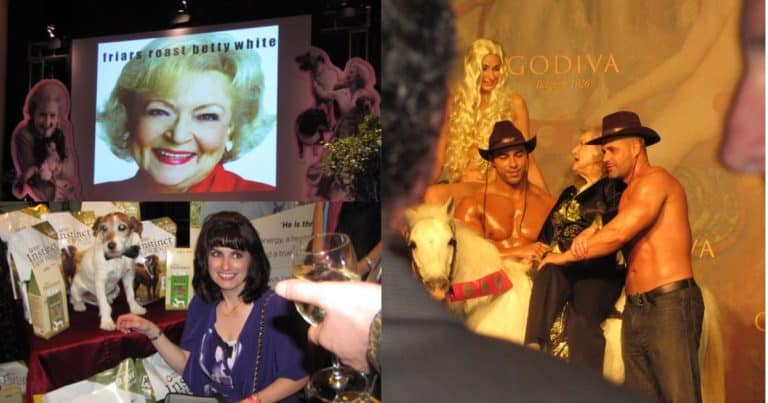 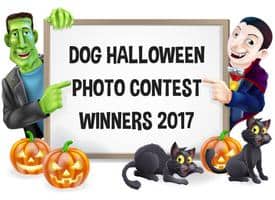 The winners of the Seventh Annual Fidose of Reality Dog Halloween Photo Contest have been selected.  Woof woof, did you all ever up the bark and the bar for originality, creativity, and fun!  Your…