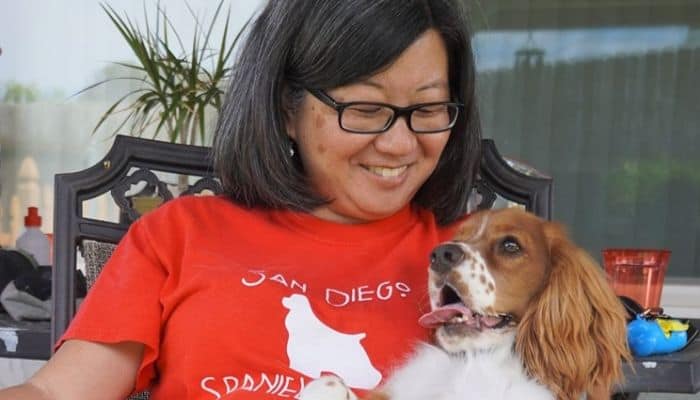 Cocker Spaniels are like potato chips: you can’t have only one. Kindergarten teacher Naomi Lukaszewski has a passion for the breed but she certainly cannot own over 100 of these adorable dogs. She did the next best thing to embrace her love of the breed while saving lives.

Naomi Lukaszewski and her husband Dan have fostered 111 dogs to date and they have no plans to slow down. 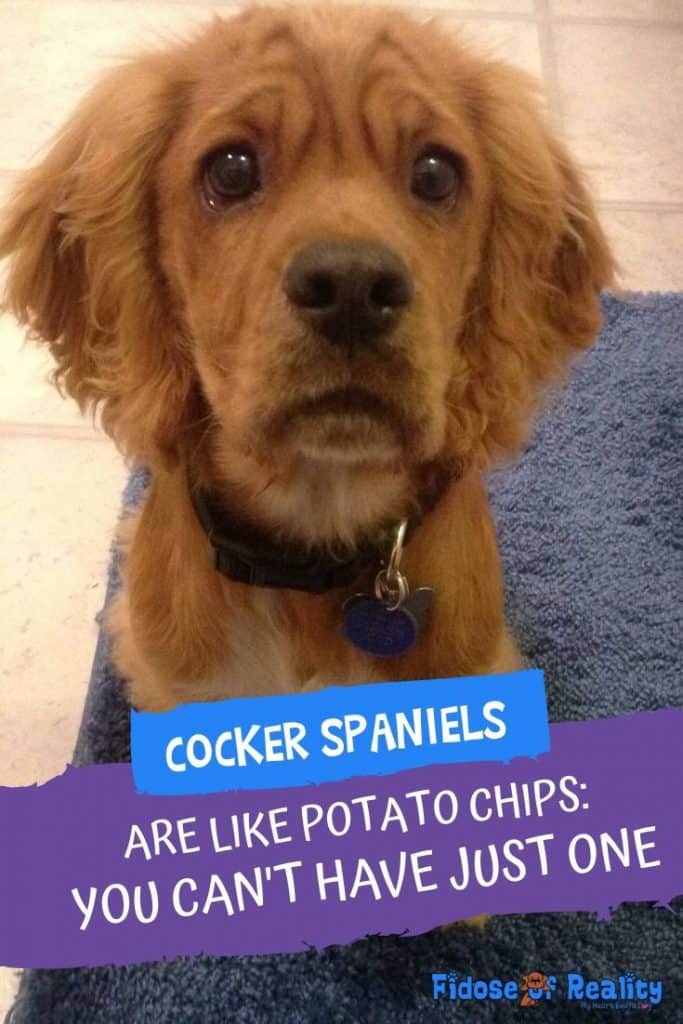 Why They Foster So Many Cocker Spaniels

The husband and wife duo started volunteering for San Diego Spaniel Rescue in 2009. They adopted a Cocker Spaniel, Mia, in 2008 and discussed bringing a second dog into the family. Thinking they couldn’t afford another pooch, volunteering to foster seemed like a great alternative.

Jumping in feet first, the duo learned to groom Cocker Spaniels to cut costs and make the animals more appealing and ‘adoptable.’ On school breaks and weekends, the couple volunteers with rescue transport and in-home visits for potential adoptions.

“Fostering has not only educated me about dogs (Cockers are really kindergartners with four legs and fur) but about people as well,” she said. “I intend to continue doing this because it’s addictive and I love seeing the joy on people’s faces when they welcome a new dog into their lives.”

Having met Naomi in person, she is calm, poised, and casts a glow of confidence. She most definitely has the aura of a kindergarten teacher, which lends itself well to her foster life.

She admits it was Dan who first presented the idea of fostering. He shares in her joy when the foster pups find forever homes.

“My husband describes the fostering process best,” she mused. “It’s like having a roommate. You don’t necessarily want to marry your roommate. When they move out, you wish them well.”

Naomi never considers her foster animals as her own. Rather, she views her role as a dog sitter for the foster’s future family.

Why Cocker Spaniels Over Other Breeds?

It’s neither Naomi nor Dan’s fault they are so enamored with the breed. Their neighbor, a woman named Mary, had two Cockers. As Cocker addicts can attest, it’s easy to fall in love with the breed’s merry disposition and clown-like mannerisms.

Mary visited the Lukaszewskis one day and declared, “Look, I found a dog for you!”

Naomi admits the dog, Mia, had her at first glance. The black and white tri-colored Spaniel became the couple’s first foray into the world of “wigglebutts” and they haven’t looked back.

One day while grooming a foster Spaniel, full of dog hair on her clothing and table, Naomi announced to Mary, “This is all your fault!”

Of course, she and Dan are smitten with the breed, their passion to pay it forward, and helping to save dogs’ lives in the process.

There are always “standouts” in any crowd, and Max, Wayne, and Mylon are the big three that Naomi and Dan will never forget.

Max was about to be executed. Naomi will not use the term ‘euthanasia’ for unadoptable dogs, which she feels translates to ‘unattractive’ or ‘requires work.’ Euthanasia ends pain and suffering, and Max was neither.

He was depressed from living in the shelter for so long, required eye surgery, and longed for someone to give him a second chance. San Diego Spaniel Rescue saved his life, and Max wrapped himself around the dynamic duo’s hearts.

“He was only our third foster, so we were still trying to keep him out of the bedroom as well as gating off rooms,” she remembered. “Max cried and whined, so I caved and brought him next to our bed.”

Max promptly made himself at home on the couple’s bed, curling up by them, and drifting off to sleep. Max is the dog that taught Naomi that fosters never truly belong to her.

The day he left for his forever home, he did so without a backward look at them, which confirmed to Naomi that a dog who was truly hers would have never wanted to leave.

If first impressions are everything, Wayne showed the couple that he was a wild child. They met at an adoption event for the rescue group where Wayne barked at the slightest provocation. The leash-aggressive Spaniel wrapped himself tightly around a nearby tree and obsessed over anything that moved, including his own reflection.

Anyone who adopted Wayne soon changed their minds. As he came back into their lives over and over, Naomi noticed the dog grew fond of their daughter, Natalie.

She recalled, “What stole my heart and made me determined to get him the best possible home was the night I had to take him to the emergency vet after he was attacked by a 60-pound dog.”

As the mother-daughter team waited in the exam room with Wayne, a male vet tech approached. Despite his pain and inability to bear weight, Wayne suddenly jumped off Naomi’s lap and ‘body blocked’ the technician from approaching Natalie. Naomi knew the dog would give its life for the girl, so she devoted herself to helping the reactive Cocker find his perfect owner.

After two years passed, a lovely lady asked to meet him at a local dog park. She learned Wayne had been waiting the longest for a home. Any fears or apprehensions vanished when Wayne saw this woman.

He walked towards the lady and nudged at her, asking to be touched.

“I was flabbergasted,” Naomi recalled. “Wayne never did anything like that, but he left the park that day with his new mama, without a backward glance. He was never truly mine.”

Tipping the scales at a hefty 50 pounds, Mylon suffered from thyroid and yeast issues that required medicated baths every few days.

Naomi invested in loofa gloves to help smooth his tattered skin. Within weeks, Mylon emerged as a happy, beautiful Cocker Spaniel who loved both the hairdryer and snuggling.

“I never cry when my fosters leave,” Naomi shared. “The day he got adopted, I broke down, but not because I wanted to keep him. He came a long way from being unloved at a shelter to a cherished member of a beautiful family.”

About Foster Failing (It Happens)

A foster fail occurs when the temporary dog takes up permanent residence with his host family; in this case, Naomi and Dan.

The couple are two-time foster fails. Steadfast that she did not want a puppy because she admits to spending her days with ‘two-legged puppies,’ Waffles entered the picture.

Though Dan was not interested in a buff-colored Cocker, Waffles cast a calming aura that snared the doggy dad at first glance. She blessed their lives for four years before succumbing to lymphoma in the fall of 2018.

“Lymphoma provided us a long goodbye and time to prepare for Waffles’ passing,” Naomi shared. “Richie was the first dog to come along that both Dan and I really liked.”

The connection was undeniable, as Richie was born on October 19, 2018, the anniversary of one of their earlier Cocker’s passing and a mere three-day difference from Waffles’ death. Richie was foster fail number two.  The couple renamed him Opie because he is a cute, red-headed, freckled boy like the character in one of Dan’s favorite television programs, The Andy Griffith Show.

Fosters Meet Forevers: Is There Drama?

“Our first foster, Bailey, and the dog we owned at the time, Mia, hated each other,” she said. “Mia tore Bailey’s ear so I ended up donating money to the rescue after Bailey required a dozen stitches.

Accidents happen, but so does the tenacity of this woman with a revolving door for foster Spaniels and her equally outstanding husband. With time, foster dogs learned to tolerate Mia, even having to pass what Naomi called “the Mia test” to get approval before they could stay.

Now and then, the couple’s permanent Cocker, Waffles, would pass judgment and gaze at her owners as if to say, “Why do you bring these dogs home?”

When twice-rejected wild Cocker Wayne tried to take up residence in the home, Waffles practically rolled out the red carpet for him.

“Waffles literally ran in circles with excitement when she saw him!”

If she ever could not care for herself, perhaps then Naomi will consider hanging up her dog leashes and grooming tools.

She does see a time when she and Dan solely foster so they do not outlive the animals in their lives, but why?

“We’ve had several fosters that ended up with a rescue because they outlived their owners and there was no one in the family who could take the dog.”

We hope that Naomi and Dan inspire everyone to take one step forward to help a dog in need. If you can’t physically foster a dog, consider cyber fostering a dog. You simply donate every month to your favorite rescue. Ask that your dollars be donated to a specific animal. We’ve gathered some specific resources to help you on your foster journey to help Cocker Spaniels or any dogs in need.

Naomi inspires us so much that we hosted a fundraiser here in Pennsylvania to benefit San Diego Spaniel Rescue out in California. Miles don’t matter when dogs’ lives are on the line.

We raise our sparkling water bowls to you, Naomi and Dan, and to all those Cocker Spaniels who thrive because of your kindness, generosity, and perseverance.

Check out our fun fundraiser for Cocker Spaniels in need here.

Resources To Foster Cocker Spaniels And Other Dogs

How to find a reputable dog rescue

Is a Cocker Spaniel the right dog for me? 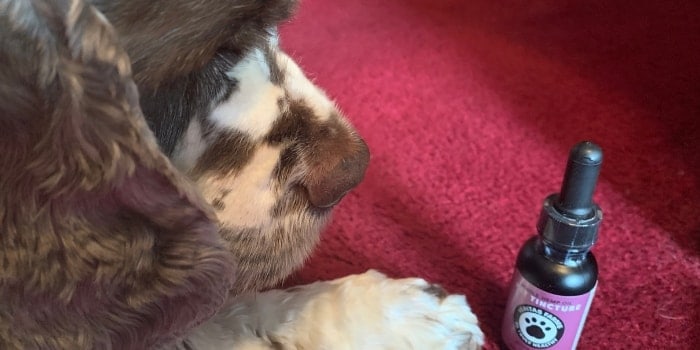 If something could help my dog’s anxiety, arthritis, and lipomas, I certainly want to know more about it. That’s been the journey I’ve taken over the last several years with CBD research. Why… 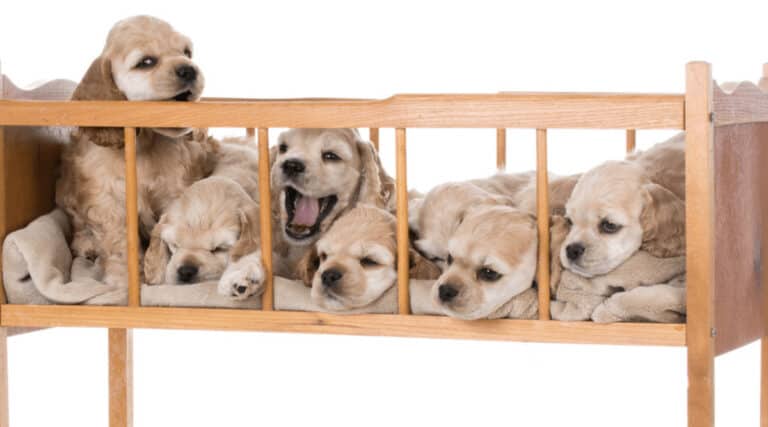 Cute and cuddly aren’t the only things that matter when buying puppy toys for Cocker Spaniels. Smart marketers know that adorable puppy toys sell, but safe, durable, and age-appropriate puppy toys matter most. … 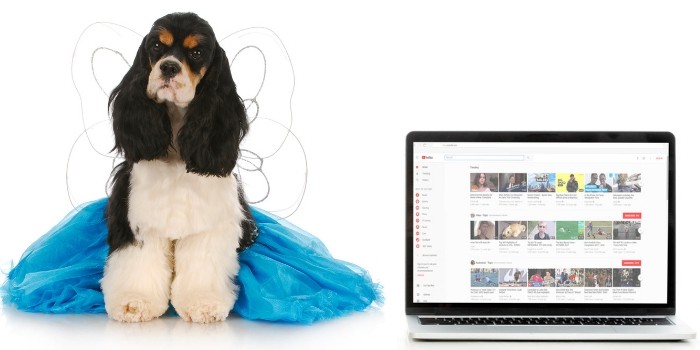 Cocker Spaniel lovers, rejoice. We scoured the Internet and curated 84 of the very best Cocker Spaniel gifts online. From handmade and vintage to jewelry and crafty, wearable to giftable, this merchandise collection…