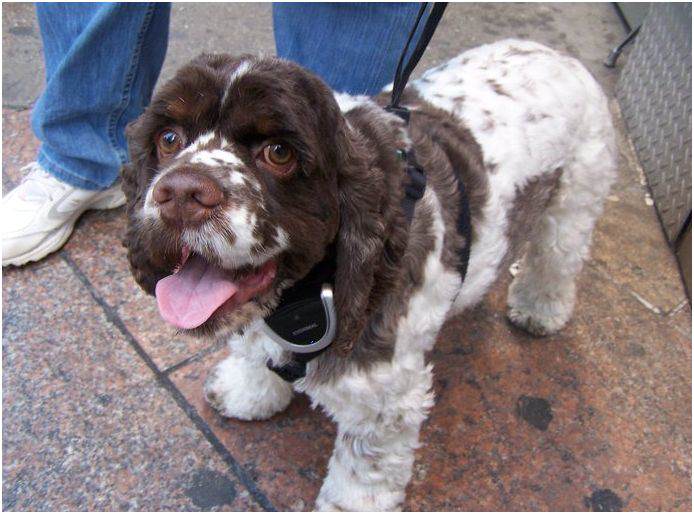 Limp. Pop. Stagger. These are three things I really never wish for my dog to experience and in the past few weeks all three have come to fruition. No tail wag here.

Ninety days and two weeks have come and gone and Dexter’s partial ACL tear has seen its good and bad days. For those unfamiliar, my dog injured his ACL (anterior cruciate ligament) in March of 2013. We went from veterinary diagnosis of a partial ACL tear with strained iliopsoas muscle to laser therapy to a custom orthotic stifle brace. We opted for conservative management (CM). And now 90 days of wearing the brace off and on, here’s the update:

Despite all my ardent fervor, due diligence, trying my hardest to avoid surgery, and following the CM protocol, Dexter now has a full ACL tear and a possible damaged/torn meniscus.  Bleachhhh.

I was told by the place that fitted Dexter for his custom orthotic that he could pretty much resume activities of daily living. Dexter is not an overactive dog, but he likes to run and play, chase a ball, play wrestle, and socialize with people and pets on our daily walks. Something never quite set right inside me to let Dexter do some light running to chase a ball at a nearby park, but I allowed it. After all, the brace was stabilizing his knee and promoting scar tissue formation at the spot of ligament tear.

What is more likely is the brace did help to stabilize the knee but his running with it on did more to put stress on the already fragile ACL and snap, one day it just gave out. Along with the pop sound I am hearing now and again during leg movement, Dexter’s veterinarian feels there is also meniscus damage as well. There was definitely not a strict period of “rest,” so now we escalate to the next level of treatment: surgery. 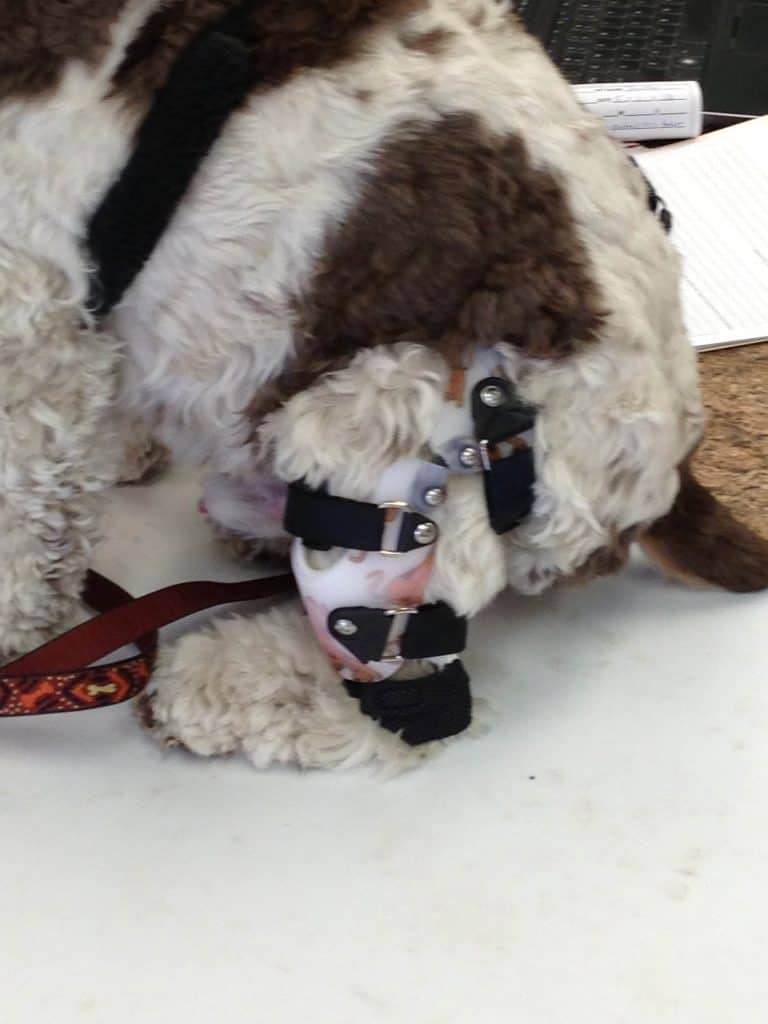 There are many different types of surgical procedures for an ACL tear. A rip is simply not a rip, and a procedure to repair it runs the gamut: Depending on the size, age, condition, and so on, of the dog. We can pick from a variety of surgeries: Fishing line basically is sutured into place where the ligament is torn, the healing occurs, the scar tissue forms, the suture pops, and wha-la: New doggie (so to speak).

Other surgeries include one called the TPLO, which I am hearing a lot about, but this involves breaking the bone, putting in a plate, and then doing some really technical stuff to the whole area so it heals up nicely. This tends to be performed on larger breeds of dog, with their bigger bones and all.

My stout-legged Cocker Spaniel seems to be more of a candidate for extracapsular repair with the fishing line.

Go Fish For a Surgeon

Unfortunately, Dexter’s veterinarian does not perform orthopedic surgery of such a detailed procedure, so I get the lovely task of finding a surgeon I like, trust as much as possible, and who will do the procedure skillfully and with a sense of compassion to both me and my dog. “Don’t be a jerk-itis,” as I like to call it.

My last Cocker Spaniel went through orthopedic surgery at the Cornell University Hospital for Small Animals due to a knee cap that slipped its location: a patellar luxation. I slept on the floor with her for months and she recovered perfectly. This is a different injury and times have changed.

It took me a few days to write this blog post because my insides felt like they were going to explode. I just hate the fact that my little man is injured and all my efforts to make him better without anesthesia, surgery, and the icky postoperative recovery and rehab time could not be avoided.

On Tuesday, August 20th, we have an appointment with a local surgeon in a recently opened veterinary hospital. He is the only board certified surgeon in this area and so an initial consult will happen. Is it me or do any of you get the “ugh, here we go again” feeling that washes over you when having to deal with a new vet. I feel like I am the one fishing: I cast out, hoping to find the right catch and doing a secret prayer that if I catch one, he or she doesn’t have to be “tossed back.”

If this guy ends up not being the right fit, we will start over: Our vet has recommended a center in Maryland that apparently does orthopedic surgeries on government dogs, so one would believe they don’t mess up. I’m putting the cart before the horse though, and I need to see if the vet a mile or so from our home works out.  And despite my many attempts to change his mind, our vet cannot do the surgery. Crap. 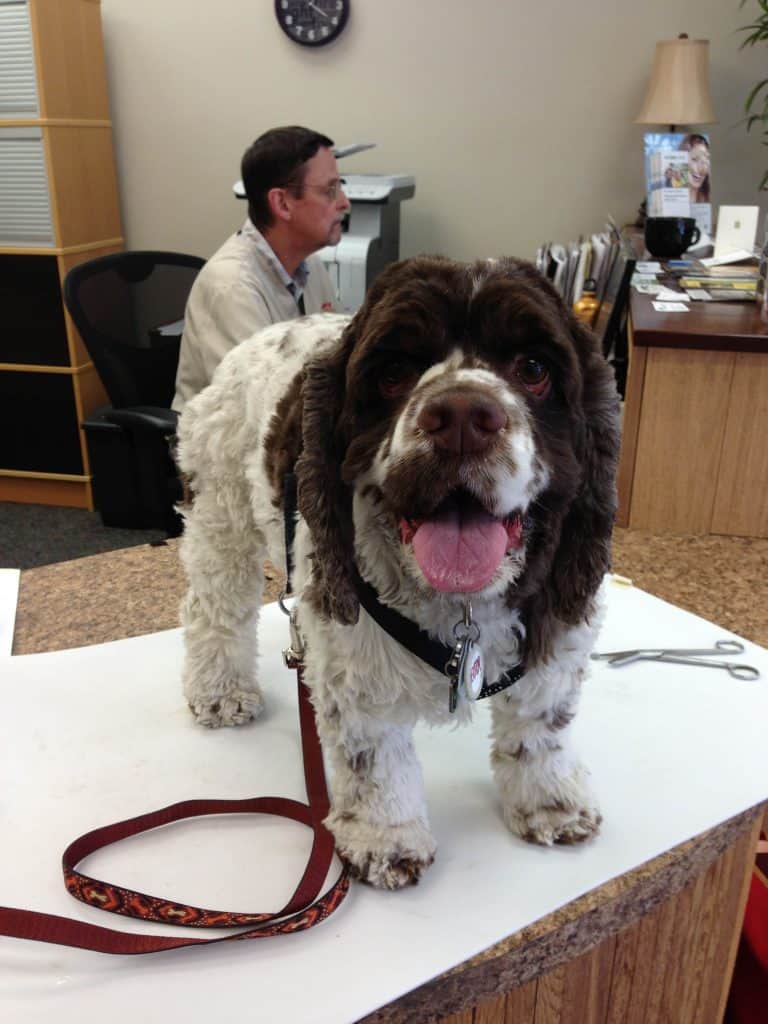 I would not change a single thing about the course of conservative management we have been on since earlier this year. I would be stricter about it, calling my vet to ask if allowing Dex to run in his brace was indicated (it was not), and I’d continue with more laser therapy sessions.

But that’s all water under the bridge now. My concern is the other leg developing a tear of the ACL. According to ScienceDaily.com, over 1 million ligament repairs are done in dogs every year, at a cost of over $1 billion dollars to U.S. dog owners.  ACL surgery is not cheap, and even with my pet health insurance policy, there will be a cost. I’d sell my organs to help my dog, but it’s nice to have the cushion of pet insurance.

Recovery isn’t a cake walk either, but nothing as invasive as knee surgery ever is, as anyone of the human variety who has had knee surgery can attest.

Meantime, my little man knows he is no longer able to fetch a ball and that trying to run fast results in an “oops, can’t do it” reminder from his damaged leg. Da boo boo leg, as I call it.

For bigger dogs going through this process, my dog blogger buddy, Jennifer Costello, is undergoing the exact same thing with her Newfie, Sherman. You can read all about that process here: My Brown Newfies ACL Issue

For smaller dogs than Dexter going through this process, my dog blogger buddy,  Jodi Chick of Kohl’s Notes, is opting for super conservative management and intense physical therapy to avoid surgery. You can follow that process here: Kohl’s Note ACL Injury Process 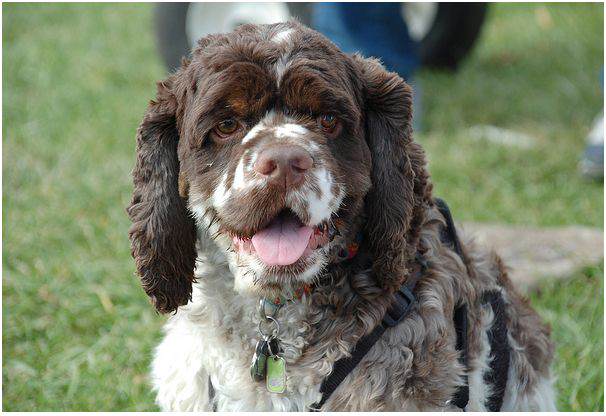 You can revisit the journey I’ve been on with Dexter by following our ACL process here:

The Dog Knee Structure for Dummies (aka me)

I know now more about the anatomy of a dog’s knee than I ever could have imagined I would. 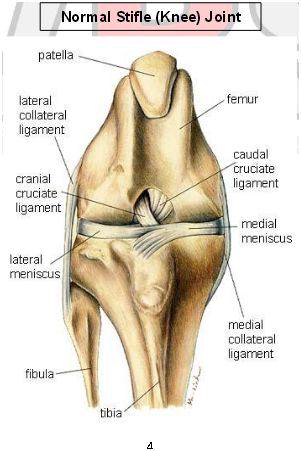 With me so far?

The joint fluid is surrounded by a joint capsule. The CCL and one other ligament form a cross shape. With any movement, something needs to absorb shock. The shock absorbers of the dog’s knee are called meniscus. The femur sits atop the meniscus, so if your vet takes an x-ray of your dog’s knee, you will see what appears to be a space between the tibia and the femur. This is not a space at all, but the meniscus. Dexter’s is believed to be damaged. You also cannot see ligaments on x-ray. The diagnosis of a torn ACL comes with orthopedic manipulation by the veterinarian.

So how does the ligament get damaged? Have you ever had a door break its hinge so that the door doesn’t open very well, if at all? This happens with a dog’s stifle joint when the CCL is compromised. The bones no longer properly align and the joint isn’t working as it should. Slice the ligament and there will be pain, inflammation and cartilage damage. Not good.

The bones are basically rubbing when they do not need to be doing that. This is called cranial tibial subluxation. Ouch.

According to the folks at CanineKneeSurgery.com, humans stand straight up, with their femur directly on top of their tibia, having a joint angle of 180 degrees. Dogs stand with an angle of 135 degrees. You can see in the diagram below from Canine Knee Surgery that the bone alignment depends on the CCL being intact to hold them in place. Chronic wear and tear on the CCL means it will eventually fail, and in my opinion, at an even greater risk to a knee injury. Angled bones with jumpy dogs have an increased likelihood of having issues. 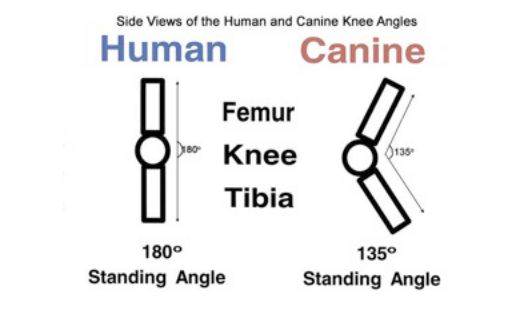 That’s where my life is right now: Limp. Pop. Stagger.

Stay tuned for more updates as we progress through the ordeal. My hope in writing this series is to help dog parents being more informed and better educated when dealing with an injury of this nature in their own dog.

Note: I am not a veterinarian and the experiences above are that of my own and not indicative of what I recommend or indicate to others. Always seek veterinary advice for any injury or issue with your own dog.