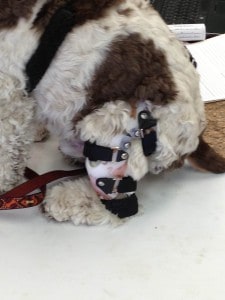 My dog has a partial tear of his ACL/CCL (ligament) in the left rear leg. I’ve been blogging about this for a number of weeks, and he’s had an issue for about 6 weeks. We’ve tried rest, homeopathic meds, cold laser therapy, and now we are onto the custom orthotic better known as the knee brace. I don’t want my dog to have ACL surgery if at all possible.

To recap, our we went down the cold laser route and blogged about that in our first entry to this saga.

Then we went down the getting fitted for a brace and how it all works in our second entry about the ACL tear here.

We are taking more conservative approaches because:

A) I don’t want to have to put my dog through something as invasive as surgery, especially considering this Veterinary Practice News article solidified my decision.

B) I prefer to do what is in my dog’s best interest and go the conservative and alternative route, considering veterinary medicine is in many ways, starting to mirror its human equivalent. 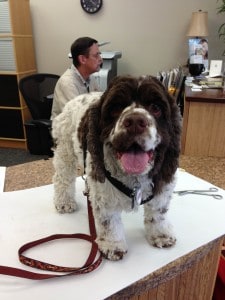 After the initial casting and waiting for the custom orthotic to be made by My Pet’s Brace, we trekked to the facility about two hours from our hometown.

Not to sound all infomercially, but the folks at My Pet’s Brace know their stuff.  For $625, Dexter will be wearing a knee brace that is moveable, conforms to his stifle anatomy, has a 90-day adjustments and modification warranty, and is already being readily accepted by my dog.

When we went to pick up the brace, we were instructed on how to apply it, what to watch for, any abnormalities, and then we applied the brace in front of the man who made it. Dexter is a very easygoing dog but I know at this point, with all of the manipulations to his leg, he had to be thinking “yikes, Mom, enough with the poking and prodding.”

We were able to videotape his first walk with the new brace in place, and he did incredibly well. Some dogs take hours, other take days, but eventually a well-fitting custom orthotic is something to which dogs adapt.

As you can see, Dexter did incredibly well. We need to start him out with wearing it for 3 hours at a time, increase to 4, and so on. He is to wear it during “active” waking hours. For a 4-year-old Cocker Spaniel, that means he will be wearing it for probably 7 or so hours a day: walks, any activities outside, etc. For indoor use and nap time, we want his leg to breathe. I will continue the homeopathic anti-inflammatories of Traumeel and Heel and use Tramadol if needed. Through all of this, Dexter never let out a peep to indicate pain. Dogs are good at masking that, so pet parents need to be astute and know what “the norm” is.

I will keep Fidose readers posted every few weeks now, as our plan of action is to keep the knee stable, allow scar tissue to properly form, and avoid the knife. I wouldn’t rush to my doctor for a partial ligament tear with the goal of surgery and I have the same expectation for my dog. 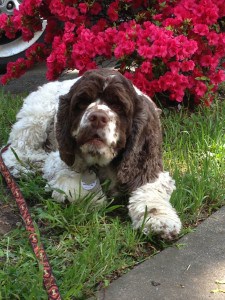 Consider every option and do research before jumping in feet first to allow your dog to undergo invasive surgery. It is an option for some dogs, but not all, through my research and talking to many dog moms and dads whose dogs have a full or partial ligament tear.

Side note: Our friend at My Brown Newfies has a larger dog (obviously, a Newfoundland aka “Newfie”) that has the same problem. They are going the conservative route, too, and you can follow that saga on her My Brown Newfies blog.