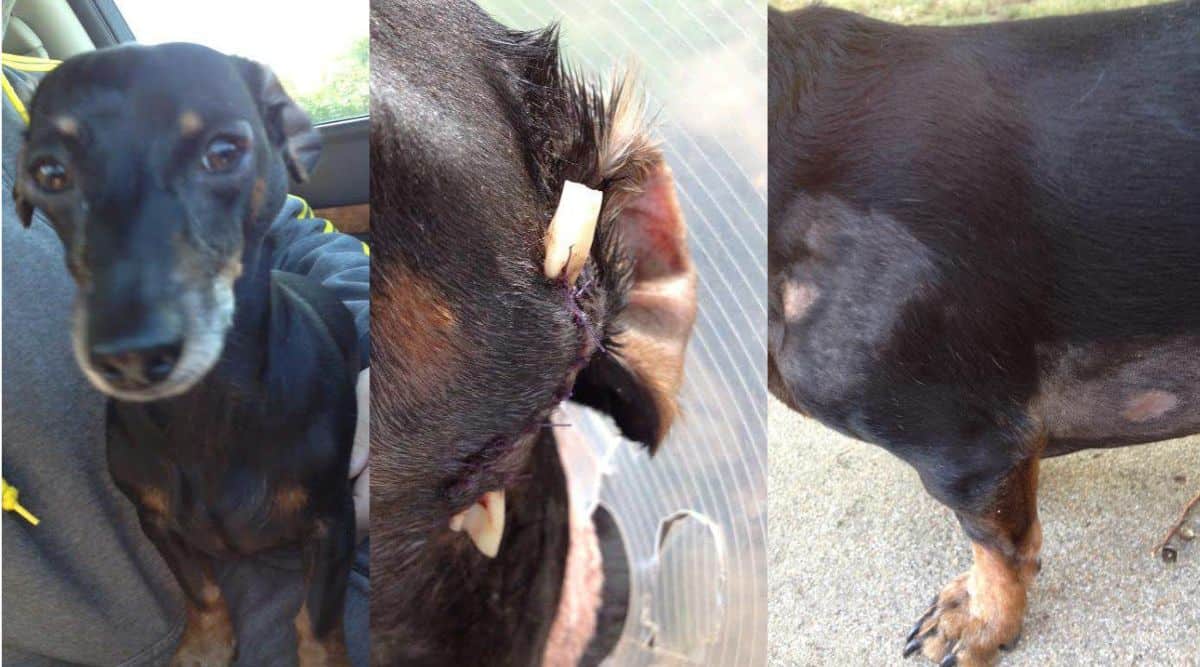 Panniculitis in dogs is an inflammatory condition that stops pet parents in their tracks. Kansas dog mom Devri King woke up one day and noticed a large lump on her Dachshund’s cheek. She rushed the dog, named Thurmie, to an emergency veterinarian, where he was diagnosed with an abscess. This is the beginning of Thurmie’s journey to a diagnosis of panniculitis.

Panniculitis is defined by the Veterinary Information Network (VIN) as “a group of diseases characterized by localization of the major focus of inflammation to the subcutaneous fat.”

It appears as lesions in one or more areas seen as deep nodules in the skin. They tend to ulcerate, drain, and excrete an oily substance. Despite veterinary literature indicating canine panniculitis is rare, VIN says it is more common than generally believed.

Of the more common breeds affected, Poodles and Miniature Dachshunds, Thurmie fell into the latter category. VIN suggests this may indicate a genetic component to this disease.

However, any dog at any age can be affected. Here’s Thurmie’s story along with everything you need to know about symptoms, diagnosis, treatments, and the prognosis for panniculitis in dogs.

What Is Panniculitis In Dogs?

Despite staying overnight at the emergency veterinarian with a high temperature, things weren’t any better for Thurmie the next day.

King took her miniature Dachshund to her regular veterinarian, who lacerated the lump, placed two stitches in Thurmie’s cheek, and left the rest open to drain. It never drained.

When inflammation affected the fatty layer of a dog’s skin, called the subcutaneous layer, panniculitis can occur. Causes of inflammation include bacterial, viral, or fungal conditions, trauma, pancreatic disease, immunologic disease, and drug-induced or vaccination-induced causes.

Panniculitis in dogs generally appears as one or more nodules under the skin. The nodules may be firm or soft and mostly moveable in their early stages.

Sometimes there is no cause known for panniculitis, which is dubbed idiopathic. Panniculitis looks like deep nodules that may be solo or appear in multiple areas of the dog’s body.

“At this point, several other smaller lumps appeared on various spots of his body. A deeper laceration was done on the lump on his cheek, and a drain tube was inserted,” King says.

“A little bit of the fluid that was in the abscess drained, but the tissue around it was hardening. The vet took cultures and biopsies of several of the lumps in an attempt to find out what was going on. In all, a total of probably 15 lumps had developed all over his little body.”

In her own words, King continues.

On May 22 of that year, after several other little lacerations and after the veterinarian consulted with a specialist at Kansas State University, Thurman was diagnosed with Sterile Nodular Panniculitis.

The vet called it an immune system deficiency, with no cause identified. There were no bacteria in any of Thurman’s biopsies or cultures. He began his treatment that very day, May 22, and within a few days, the three lumps that had developed in his groin area were completely gone.

This regimen will continue to be cut down with his progress, which has been nothing short of miraculous. No lumps have returned since the day treatment began.

“Some owners may claim a history of previous surgery at the lesion or the area of the first onset,” says Toshiroh Iwasaki, DVM, PhD, DAICVD.

In Thurmie’s case, he never had surgery in any of the affected areas. The folks at petMD indicate panniculitis can be caused by several things, including:

“Rather, it is a cutaneous marker of systemic disease in many cases. After thorough evaluation for concurrent disease and infectious causes, immunosuppressive treatment is often effective.”

The authors indicate SNP can be idiopathic, but it has been “associated with underlying conditions such as pancreatic disease or systemic lupus erythematosus (SLE).”

Of concern, they indicate the pathogenesis and clinical course of SNP are not well understood.

Like Thurman, subcutaneous lump(s) may appear under the skin. The nodular lesions may appear on the trunk and can be anywhere between a few millimeters to several centimeters wide.

The nodule(s) are either firm or soft and are moveable under the skin until they completely grow. At this point, discharge ranging from yellow-brown to bloody will ooze from the nodule. The skin can be brown, red, or yellow in color.

A scar or crusty skin layer may form over the ulcer when the nodule ruptures. Dogs may experience multiple lesions on various parts of their body, like Thurmie.

Of note, in the study published in the Journal of Veterinary Medicine, the authors indicate canine patients studied had a variety of concurrent diseases, with some having multiple conditions.

Pictures of Panniculitis in Dogs

In order to help our readers understand what panniculitis looks like in dogs, Thurmie’s mom agreed to share these photos of her Dachshund in various stages of dealing with the condition.

This does not mean the condition will appear in the same way in your dog, but as a helpful visual tool to facilitate a visit to your veterinarian.

How Is Canine Panniculitis Diagnosed?

In addition to a complete physical examination and biochemistry workup, further diagnostic procedures will be performed. In Thurmie’s case, his biopsies and cultures show no bacteria.

Dr. Iwasaki indicates testing includes cytology of pus, bacterial, and fungal culture, along with histopathology (examination of the tissue.)

One of my favorite specialists, Dr. Sue Ettinger, aka the cancer vet, said it best,

If you see something, do something, she advises pet parents. Dr. Sue’s rule of thumb is:

See Something: When a skin mass is the size of a pea or larger or has been present for one month,

Do Something: Aspirate or biopsy, and treat appropriately!

How is Canine Panniculitis Treated?

There are a few treatments for canine panniculitis, according to Dr. Iwasaki. Medications include tetracycline, niacinamide, and immunosuppressants such as cyclosporins and corticosteroids.

Having had a Cocker Spaniel with IMT (immune-mediated thrombocytopenia), an immune system disorder, who was placed on long-term steroids, you must be careful and regularly monitor with your veterinarian.

In many cases, Dr. Iwasaki indicates corticosteroids and cyclosporins can be tapered and eliminated. However, he indicates lesions (may) recur after the discontinuation of immunosuppressants in miniature Dachshunds.

Vitamin E can be given in mild cases, and antibacterial medications will be administered if fungal and bacterial infections are involved.

Thurmie’s mom read the literature about panniculitis being common in Dachshunds. She never encountered another Dachshund owner who had the condition.

“Yes, we have had to change a few things in our daily routine with him, but it isn’t/wasn’t anything that we weren’t willing to do to make this as easy for Thurman as we could,” she said. “He is in no discomfort or pain. Although he has some battle wounds from the lumps, he has been a true champ in his recovery.”

If vaccination can trigger a worsening in the condition, it may be advised that your dog not receive further vaccinations (as was the case for my Cocker Spaniel with IMT.)  Many dogs go into long-term or permanent remission, while others will require mediation for life.

Hope For Dogs With Panniculitis

Dog mom Karen Handel owns a Cavalier King Charles Spaniel who has been battling panniculitis for several years. It started with several abscesses four years ago near her backside.

Handel took her dog, Abbie, to Auburn University Veterinary Hospital in Alabama. There, she saw a dermatologist familiar with the disease, Dr. Amelia White.

“Abbie’s bouts start with one of her front legs going lame. She gets significant hard swelling above the knee to her torso. It is incredibly painful for her,” Handel says.

At Auburn, they prescribed cyclosporin and prednisone. Handel says when the Auburn veterinarian began treating her, she went about five months into remission. They rolled back the prednisone dosage, and she recently developed swelling in her front leg and was unable to put weight on it. No abscesses appeared.

The diligent dog mom is an active part of the Cavalier community, and so far, no one has heard of panniculitis in Cavaliers.

However, Abbie also has IMPA (immune-mediated polyarthritis), and she was told these autoimmune diseases tend to cluster.

Most cases of dogs with panniculitis are favorable after treatment. Dogs will require follow-up visits and testing.

If steroids are involved, blood levels will be checked. Dogs on steroids will generally show side effects, including increased thirst and urination.

In their white paper, O’Kell, Inteeworn, Diaz, Saunders, and Panciera wrote, “Prognosis for recovery was related to the underlying disease process.”

Your veterinarian and any specialists will work with you to determine the cause of SNP if they can. In cases where the cause is unknown, the prognosis is on a case-by-case basis.

Never attempt to self-diagnose and always seek veterinary care and treatment for your pet. The opinions and results above are indicative of this dog, and we cannot make the same claims nor guarantee for your pet.

Never attempt to self-diagnose and always seek veterinary care and treatment for your pet. The opinions and results above are indicative of this dog, and we cannot make the same claims nor guarantee for your pet.

If you Google “safe ways to protect dogs from fleas and ticks,” you’ll be astounded at the number of results received. Try it: The possibilities and so-called solutions are endless. It’s been a… 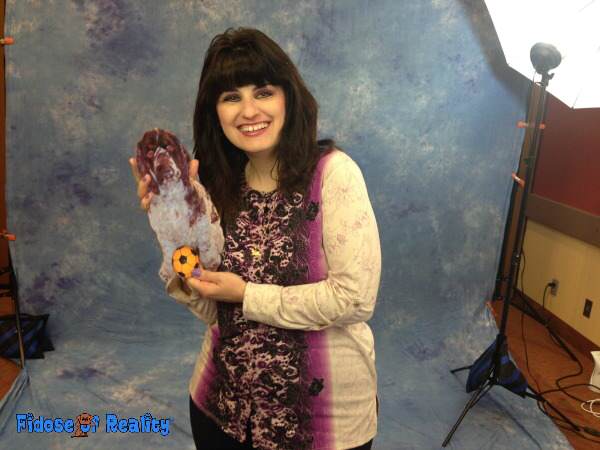 I write the blogs that make the whole world read. I’ve been tagged by a fellow fab blogger, Amy Shojai, to tell you why I write about dogs and more. I uttered that… 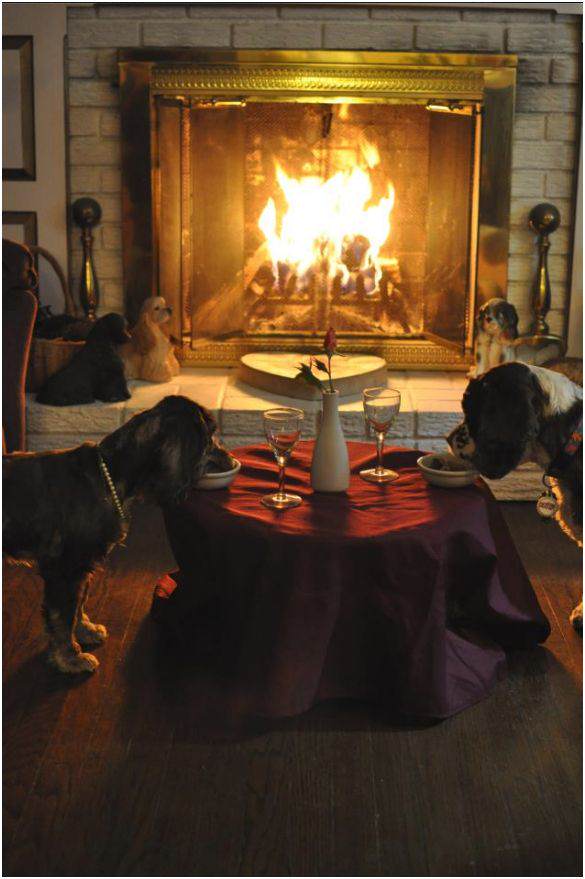 Dogs dining by our side. What’s wrong with that? Apparently there is a certain contingency of naysayers to negate dining with dogs out there. Yours truly does not mean 5-star-in-your-lap dining, but…