If you believe in miracles and dogs who have passed on sending us postcards and signs from the Rainbow Bridge, then stick around. Recently, my deceased dog came to me through the Twilight Zone. Anyone who has ever suffered the loss of a beloved dog, or any animal for that matter, I empathize, sympathize, and walk this path of hell with you. Wounded warriors we are: All this love we used to give away is now contained within the deep recesses of our hearts. Where shall we put it? Do we give it to another? Lock it away and never open ourselves to that pain again?

Whatever we choose, and whatever decision is right for you, this much I know is true: there is no wrong way to grieve (unless you are harming yourself, then please stop and seek help). In the 10 years that my Brandy Noel, my first Cocker Spaniel, has been ‘gone,’ I can honestly say I’ve never gotten over her death. I know I will never get over the death of any loved one who touches me to the core of my soul and the fibers of my being. I carry my grief with me. 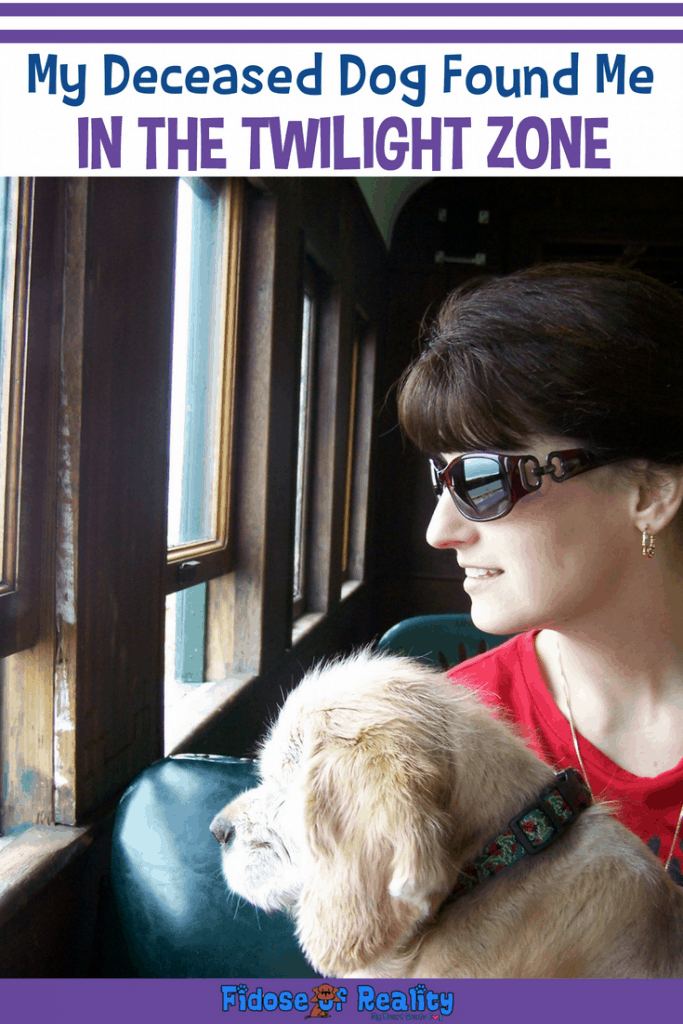 Some days my grief manifests itself as a smile to a white butterfly, who ever so gently caresses my arm as she flutters by. That same butterfly hovered over our Brandy Noel the day we ended her pain and let her go. Sometimes I cry a deep, guttural, sob and end up with a severe migraine. Most days, I carry her in my heart, through my words, onto e-screen and paper, and serve as a comrade-in-arms for other grieving pet parents. Her life has affected mine that much. Those of us who are left behind have a monumental challenge to face: How do we ever become normal again and just what is the new normal?

Some days, our beloved deceased pets are within walking distance. Here’s what happened and how my Brandy Noel came to me and my wife, along with our dog, Dexter, some 10 years after her passing. Love never ends, and this act just reinforces it for me.

It’s a Small World After All

It is no secret to long-time readers of this blog that I love to dress our dogs up for the various holidays and events we attend. Back in the mid 2000s, our Brandy Noel won a Halloween contest dressed as a clown. I altered a child’s costume and we had a small then-cassette player next to her that played “It’s a Small World After All,” when we walked in front of the judges.

We won the contest, and it remains a beautiful memory to cherish. To this day, hearing that song makes me cry, as I instantly think of her and miss her physical presence. 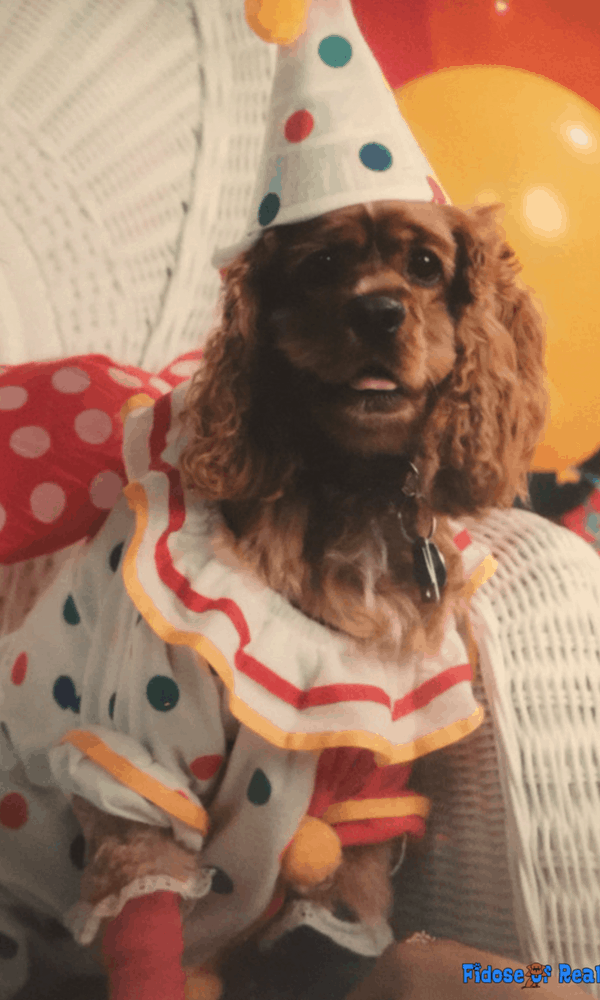 There Is A Fifth Dimension

I am an eternal fan of the popular old television show, The Twlight Zone. I grew up watching episodes with my father, and to this day, the impact of those shows remains with me. I grew to know more about the creator, Rod Serling, and he is a huge reason why I decided to become a writer.

“There is a fifth dimension beyond that which is known to man. It is a dimension as vast as space and as timeless as infinity. It is the middle ground between light and shadow, between science and superstition, and it lies between the pit of man’s fears and the summit of his knowledge,” Mr. Serling recites at the start of each episode.

My wife and I are both fans of the show, so when we learned Mr. Serling’s hometown is a mere two hours from us in Binghamton, a trip was planned. We attended SerlingFest 2018 and spoke with other Twilight Zone fans. We also met writer, Anne Serling, Rod’s daughter, and I cried telling her the impact her father had on my life and love of writing.

Another stop during our visit was to Recreation Park in Binghamton, New York.

While Recreation Park looks your typical slice-of-America grass-laden play area, it is so much more. There is a baseball field, a playground, walking paths, and two other special treasures: a carousel and a plaque.

The plaque in the gazebo area of the park pays homage to one particular episode of The Twilight Zone, Walking Distance. The episode is believed to be the most personal that Serling ever wrote for the series and one of its most critically acclaimed. 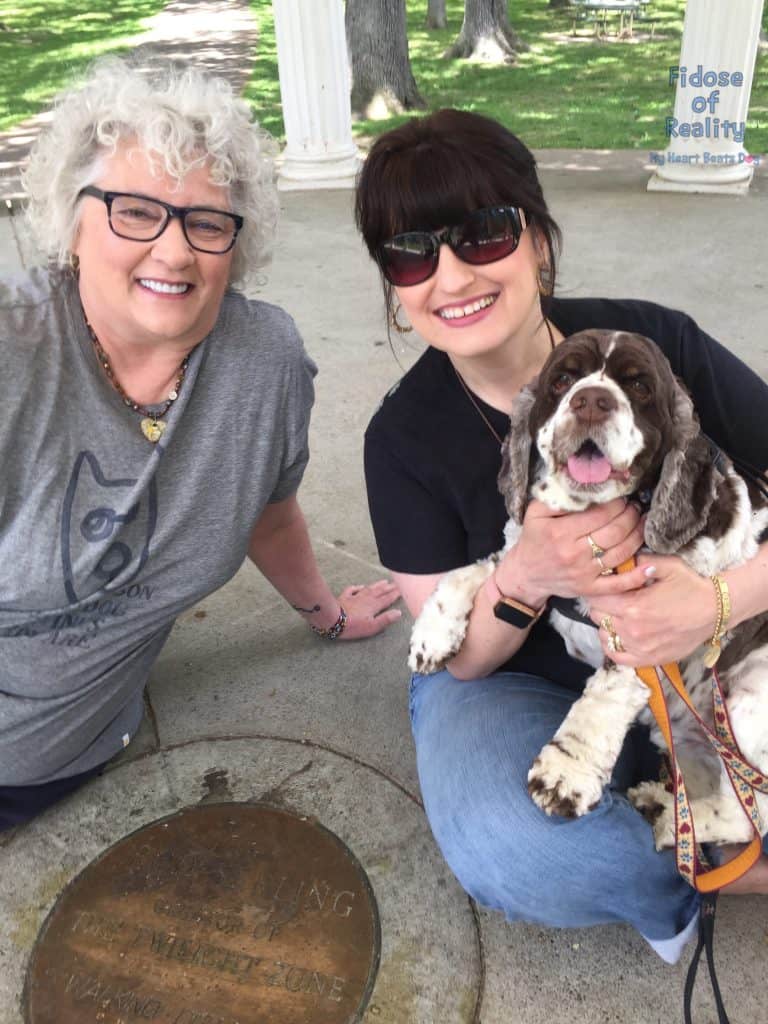 A 30-something ad executive stops by a small town and takes a walk into an area called Homewood. While there, he actually has walked back in time, as the year is 1934. He sees his younger self, his family, and the age of innocence before life got in the way. He rides on a carousel, pines for his youth, and ultimately the protagonist, Martin Sloane, realizes you just can’t go home again and he leaves Homewood.

Serling loved to walk down memory lane in his short time on earth (he passed at age 50 from a heart attack due to excessive cigarette smoking). Serling used to visit Recreation Park in his youth, and one can see the comparisons between the episode of Walking Distance and the park as it stands today.

At the close of the episode, Serling recites, “Martin Sloan, age thirty-six, vice-president in charge of media. Successful in most things but not in the one effort that all men try at some time in their lives—trying to go home again. And also like all men perhaps there’ll be an occasion, maybe a summer night sometime, when he’ll look up from what he’s doing and listen to the distant music of a calliope, and hear the voices and the laughter of the people and the places of his past. And perhaps across his mind there’ll flit a little errant wish, that a man might not have to become old, never outgrow the parks and the merry-go-rounds of his youth. And he’ll smile then too because he’ll know it is just an errant wish, some wisp of memory not too important really, some laughing ghosts that cross a man’s mind, that are a part of the Twilight Zone.” 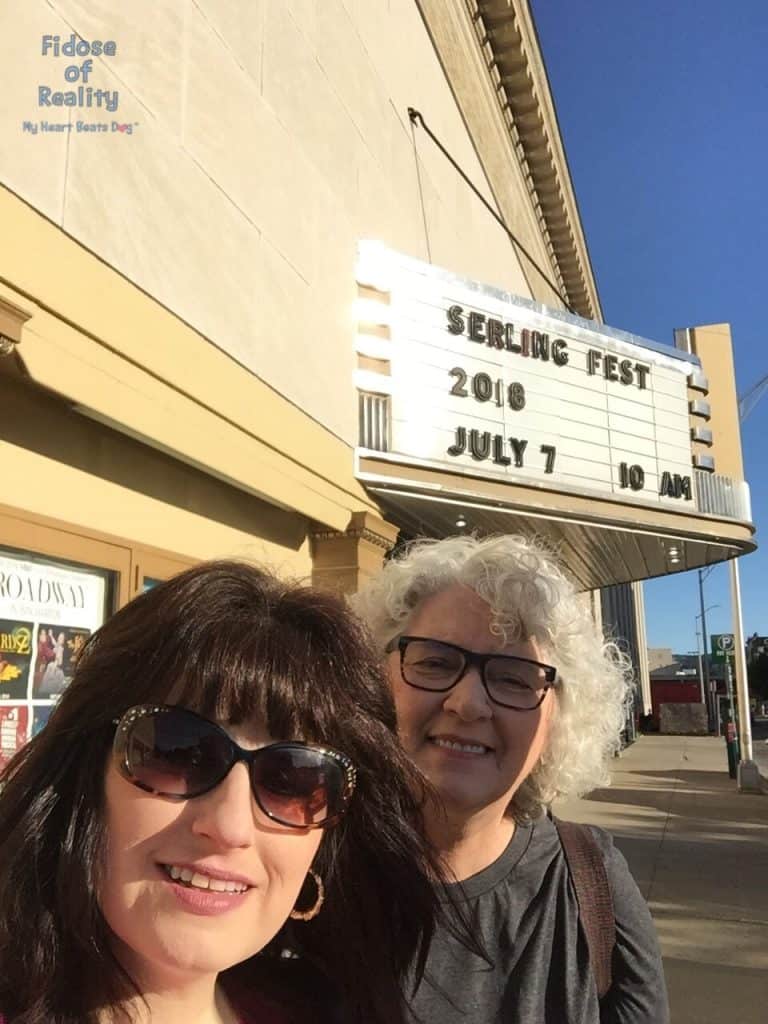 My wife and I sat by the plaque, enjoyed lunch there, and took photos. As we walked our dog, Dexter, around the grounds, we came upon the carousel. It’s not every day that one sees a well-maintained carousel in the middle of a park. The carousel is open year round and free to ride, as often as one desires.

Listening to the music, seeing the carousel horses, and viewing the gorgeous memorable scenes from the Twilight Zone that surrounded it…well, it was overwhelmingly emotional and touching all in one. We’re kind of old fashioned and sentimental folks as much as we are modern and trendy. We had to take a ride. The light-hearted calliope music played and life actually felt simple on this day.

We took turns, so that one of us could stay with the dog. What a freeing feeling to be on a carousel horse, in Rod Serling’s hometown, surrounded by dedications and paintings, and I really felt like his presence was there. Maybe it was wishful thinking, maybe I was wanting more, but I really had this calming, magical feeling, that came over me.

After my wife took a spin on the carousel, we had a conversation that went something like this.

“Did you feel something on that carousel, Dar,” I asked.

“I actually did, but not exactly sure what,” Darlene replied.

“I just wish Brandy was here to see this and be a part of it with me, you, and Dexter ” I said out loud, the thought catching me off guard.

“Oh, she is, she is with us always,” my wife, always the wise one, reminded.

After chatting a bit and taking in one last breath and sight of the carousel, we started walking towards the parking lot.

And then it happened.

With our backs turned and just about nearing our vehicle, “It’s a Small World” could be heard playing from the carousel calliope. My wife and I heard it and in unison, our eyes locked on each other.

“Are you hearing it?”

I tried with all my might to make my way back to the carousel to capture the organ sounds of our little girl’s song, but I barely caught the last few seconds on video.

The tears just fell, and fell, and then some more. I hit my knees and just stared up at the carousel. You could have knocked me over with a feather.

Of all the songs, in all the places, and in all the moments, I wished for her to be there, and across time, space, and perhaps from another dimension, our little girl fluttered her angel wings our way.

That song did not play all day, the entire time we were there, and without warning, it floated its notes across the air.

It took me a solid month or so to work up the emotional toll I knew this would take on me to write this piece. As I do, I look up and over my desk to the Rod Serling canceled check I won that weekend. Rod Serling’s widow, Carol Serling, donated this original canceled check of Rod Serling on their bank account in HIS handwriting.

It was the raffle’s grand prize, and never in a million twilight zone years did I think I would win. I am sort of beside myself once more. 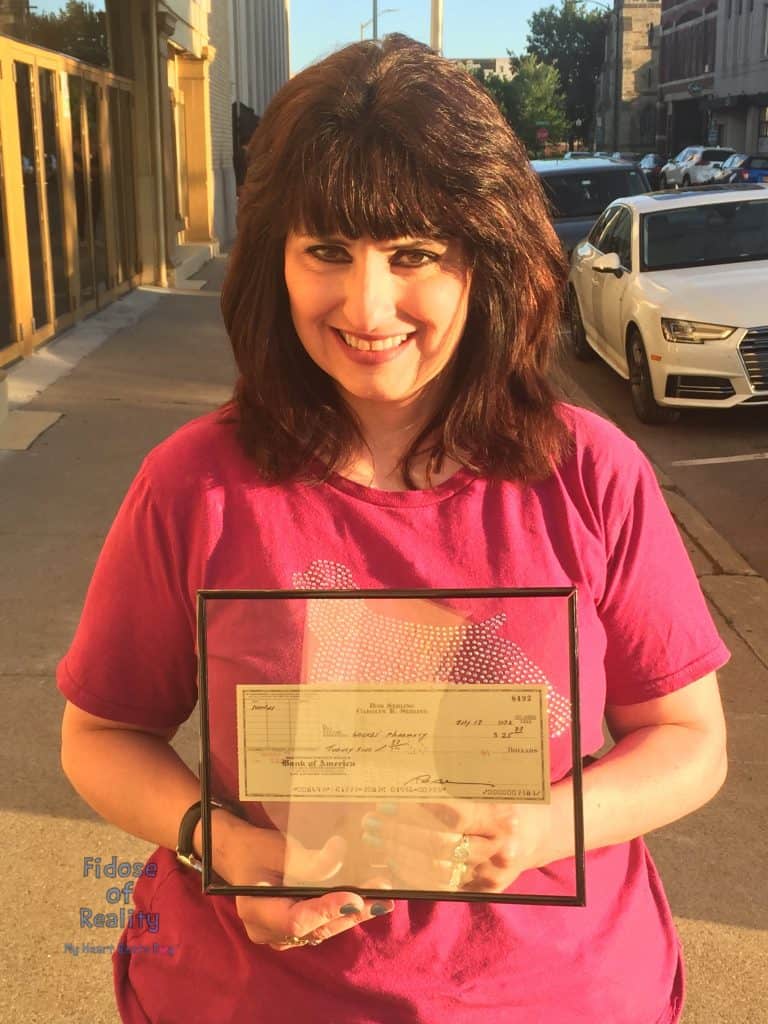 Not So Final Thoughts On Dog Grief

Looking back at my grief path over this past decade, I’ve learned the death of a beloved dog does not mean they are truly gone.

The missing of their physical presence in our human lives is the absolute worst part, sheer hell, and I have no magic formula of how to fast forward that pain. My best advice for anyone suffering is to walk through it, carry it with you, and don’t let anyone tell you to ‘move on.’ Carry on, carry the love, yes; but move on: hell no.

I will forever be a dog mom during my time here on earth, so I live with the harsh reality that I will likely outlive most of our dogs. This reality is harsh and biting, but I accept it freely so that I may live more honestly, true, and in spirit with my reason for being on this earth.

My heart beats dog, and in all its shattered little broken pieces, a little dog somehow crossed time and space to send me a message. Our beloved pets are as close as a whisper, heaven (or whatever you call it), is a breath away, and Rod Serling winked and nodded my way to facilitate these moments into a fi-dose of reality.

I am forever grateful and loved. And after all, isn’t that what sharing life with a dog is all about? Love never ends. 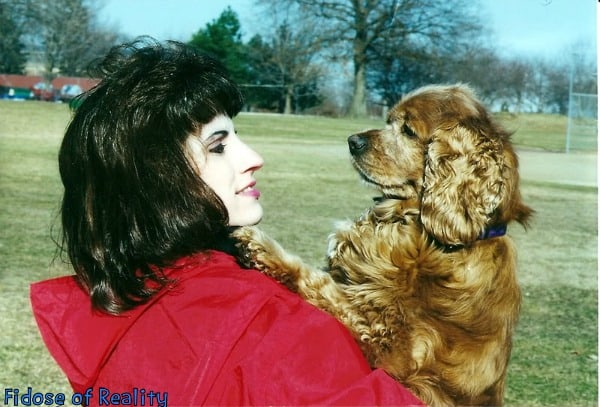 If you enjoyed this post, here are a few more to check out:

How to Get Over the Death of a Dog

Anatomy of a Grieving Dog Mom

The Miracle of Dog Mountain and Dog Chapel

Fidose of Reality, LLC is a participant in the Amazon Services LLC Associates Program, an affiliate advertising program designed to provide a means for us to earn fees by linking to Amazon.com and affiliated sites.
9shares