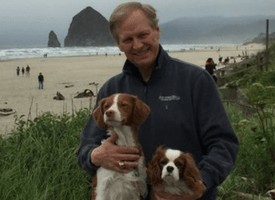 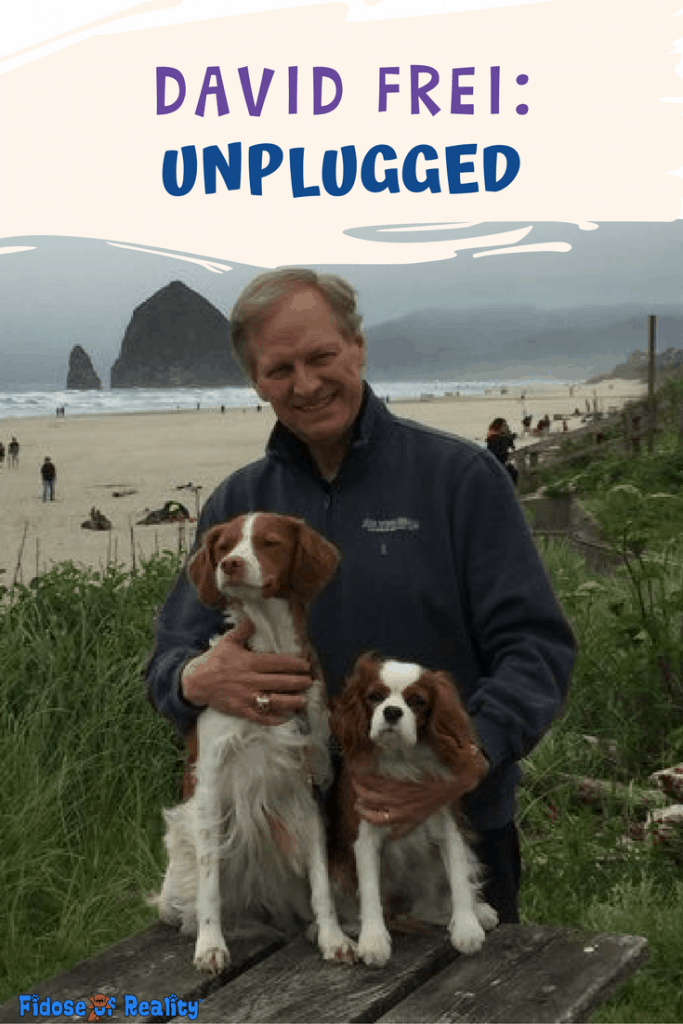 The king of dogs places me on hold because Grace is attempting to dig herself a hole in the couch. When the King of Dogs candidly admits his pooch behaves just like yours, one can’t help but have a “wow, he’s just like me” moment wash over them.

Frei, well-known to millions of television viewers for nearly three decades, as the voice of of the annual Westminster Kennel Club, knows dogs.  Frei has also been the co-host of The National Dog Show presented by Purina, a telecast seen by nearly 20 million viewers every year on Thanksgiving Day. Not one to slow down, Frei and company will hit the airwaves on Easter Sunday evening.

USA Network’s broadcast of the Beverly Hills Dog Show presented by Purina will feature Olympian figure skaters Johnny Weir and Tara Lipinski as correspondents on the show’s red carpet. The competition, which is co-hosted by legendary dog show judge David Frei and actor John O’Hurley, will also include sports icon Mary Carillo reporting from backstage. Lisa Vanderpump (“The Real Housewives of Beverly Hills,” “Vanderpump Rules”) will present the Best in Show award, and “E! News” Co-Host Maria Menounos will be on hand interviewing attendees about how their dogs are the stars of their families.

This self-admitted long-time “Freinatic” spoke with the charming Frei by phone recently for this exclusive interview and candid talk with the man who is a dog lover of the highest order.

A Tidal Wave of Changes

“If a tsunami were to hit the United States, the most likely place is right here along seaside Cannon Beach,” Frei muses about his return to the Oregon coast.

Frei is candid about his shift from left coast boy to west coast resident.

“When speaking to NBC about coming to work for them full time, they asked me what it would take to make it happen,” he says.

Frei’s response is classic: “Let’s do a dog show.”

He reminds me that there are already three dog shows in the east (Westminster, AKC National, and the National Dog Show).

The result, Frei shares, is a dog show that is fun and looks beautiful on air.

Dog Show Changes Through the Decades

When asked how much has changed in the dog show ring from whence it came in the 1800s, Frei says the competition is pretty much the same, but the entries have expanded. There were 50 or 60 breeds at a dog show competition back then. More than 1,350 dogs representing 166 breeds and varieties took part at the Beverly Hills Dog Show, which was founded in 1965.

“It’s not a life and death competition,” Frei reminds me. “I say it all the time: These dogs don’t sit around all week on doggy cushions eating doggy bon bons.”

These dogs are members of the family, whether it’s in the dog show ring or anywhere else: Luring, coursing, obedience, rally, or just sitting next to you on the couch. Frei tells attendees of a dog show to circulate and talk to people. Part of the fun is the competition, he admits, but the greater fun is seeing the great variety of breeds and getting to know their characteristics and temperament. This includes mixed breeds, so mutt lovers, rejoice!

“The alma mater factor is there,” says Frei. “If I am sitting at home watching television with my Brittany, Grace, and I see the Brittany (on t.v.), you know I’m cheering for the Brittany.”

He admits he whispers to his beloved Grace, one of two dogs with whom Frei shares his life, “If you and I just did a little more road work, maybe I bathed you more often than I do, we could compete in the ring and have fun.”

The path of this icon in the dog world takes a different route, and his fans and followers are all the more grateful for it.

What three words does David Frei use to describe himself and why?

You can’t devote yourself to a life with dogs without a sense of humor.

I am excited to share with others the great joy my dogs bring to me. Whether it’s a dog show or visiting a hospital with my dogs (as therapy dogs), I want people to smile and realize they can do these things with their dogs as well.

During the show, USA will stream a live puppy viewing party on the network’s Facebook page, allowing fans at home a chance to experience the spectacle with their favorite four legged friends. Throughout the broadcast, viewers can post photos of their furry companions on Twitter using @Purina along with the hashtag #BHDogShow to share how their dogs play a starring role in their lives. From April 10-23, Purina will donate $1 for each social media post (up to $25,000) to Leader Dogs for the Blind, a global organization dedicated to enhancing the lives of individuals who are blind or visually impaired.

In addition to the Easter night debut of the Beverly Hills Dog Show Presented by Purina, USA will present an encore on April 17 at 9 AM/8c, and NBC will air an encore on Sunday, April 23 at 1 PM/12c.  NBC Sports Network (NBCSN) will also feature the show in its annual “Thanksgiving Day Dog Show Marathon” on Thursday, November 23.

Don’t Get the Dog Show Fuss?

If the dog show ring baffles you or perhaps you just simply don’t “get it,” Frei says if it isn’t fun for the dog, then it won’t be fun for you. Dog show competitions represent a sport.

If you don’t like the dog show ring or have fun in it, then finding something else to do with your dog is key, he says. Take the dog to agility, rally, lure coursing, or something else that fits you and your dog.

Go to a dog show or watch one on television, Frei shares.

“Pay attention to what you see, what is being said, and talk to the people who have these breeds. They will explain why a dog looks as they do, why they have a certain haircut, and why the short legged dogs are so close to the ground.”

It’s all about fun and the dogs being the stars and for Frei, he’s having the time of his life.

The 5 Winners of an autographed book from David Frei are:

Five lucky Fidose of Reality readers will win an autographed copy of David Frei’s book, Angel on a Leash: Therapy Dogs and the Lives They Touch. Simply use the entry form below and good luck! USA residents only, please. Read complete rules here. 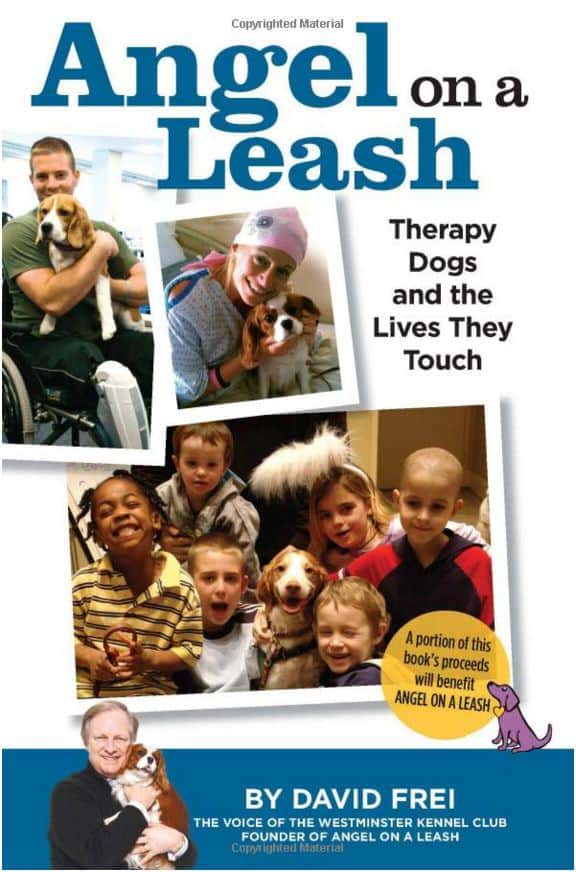 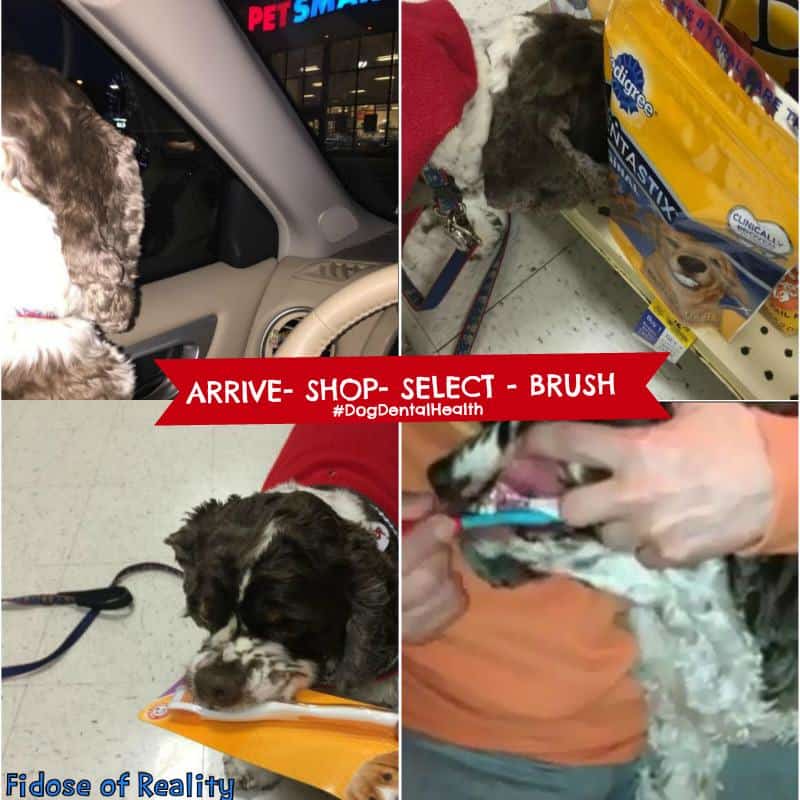 It’s National Pet Dental Health Month, and if you aren’t doing something proactive to keep your dog’s teeth clean, I can nearly guarantee you that your dog will suffer for it. Some dogs… 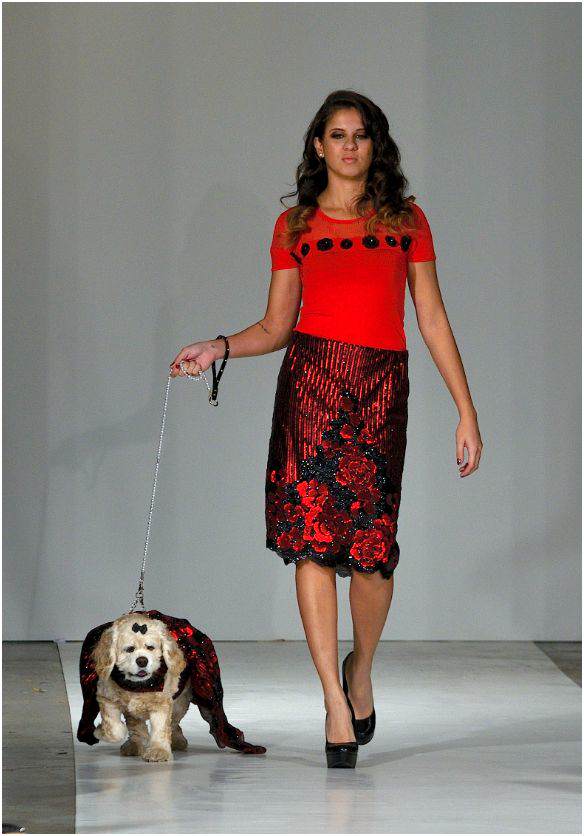 Bark is the new black, and on Saturday night in New York, one canine couturier took his fashions to the next level, as dogs pranced across the catwalk. Dog apparel for humans is making… 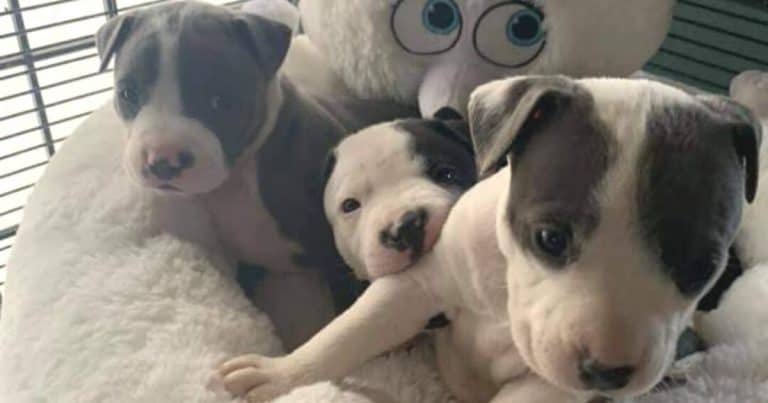 Newborn puppies require a lot of care, attention, and time, especially if they are newborn orphaned puppies. Since the onset of the pandemic, there has been an influx of orphaned puppies and kittens…