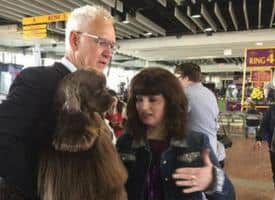 Mike Pitts has been handling dogs way too long, he says….and he loves every minute of it.

During an exclusive interview in the days leading up to the 142nd Westminster Kennel Club Dog Show, Pitts prepared for the garden green with favored-to-win American Cocker Spaniel, Striker, aka GCHP CH Silverhall Strike Force. 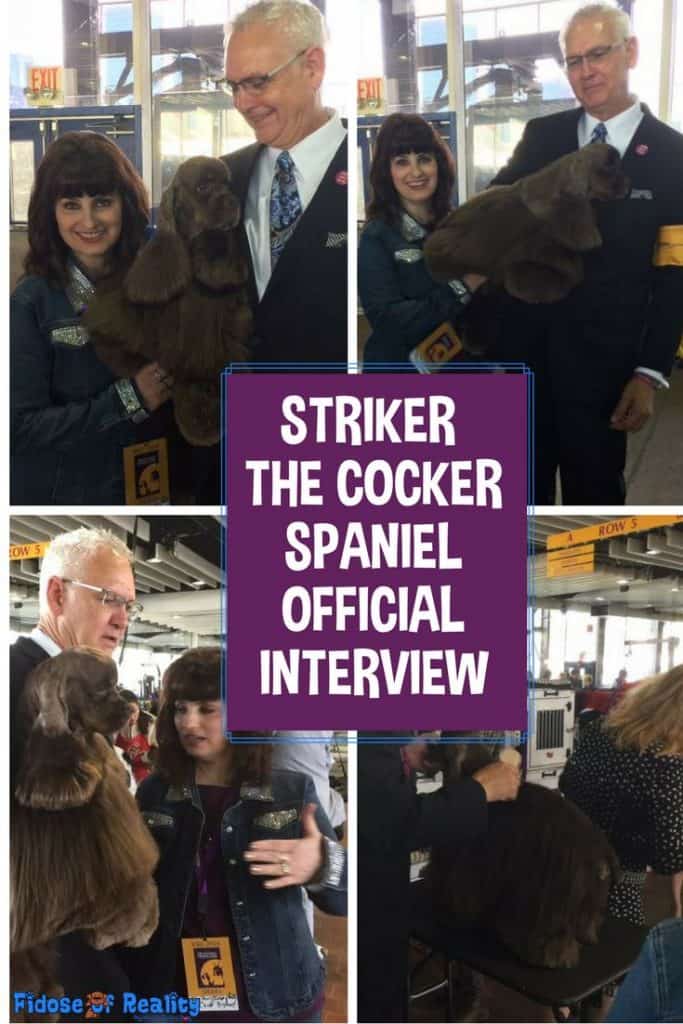 Striker is a 6-year-old male American Cocker Spaniel who competes as a show dog in the ASCOB (any solid color other than black) category. In December of 2017, Striker was named Best in Show at the AKC National Championship. Striker soared past almost 5,000 dogs to earn a $50,000 cash prize in addition to the coveted title of Best in Show. He is owned by Regina Beinhauer & Carolee Douglas and bred by Wilson S Pike & Bonnie S Pike. His handlers are husband-wife duo, Mike and Linda Pitts.

In article for the Post Gazette, it is revealed that Striker has been on the road almost every weekend. Beinheier, 68 years old, has been breeding and showing Cocker Spaniels for over 30 years.

For those unfamiliar with the dog show ring, the Westminster Kennel Club sums it up this way:

At Westminster, the first level of competition is in the Breed or Variety. A variety is a division of a breed based on coat, color or size. Each variety competes separately in the Group. American Cocker Spaniels are divided into varieties: Black, ASCOB (any solid color other than black), and Parti Color. You can read more about dog shows according to the Westminster Kennel Club here.

Note: Fidose of Reality only talks to dog lovers of the highest order and those we know treat their dogs with the utmost love and care.

Pitts has been involved with dogs since he was 13 years of age and hands on since he was 21. At the age of 58, Pitts says that’s a long time.“I fell in love with dog shows. I went to my first one at 13 and I decided on what types of dogs I liked, which were Cocker Spaniels,” he says.

Pitts went to a few dog shows, learned, bred a couple of litters and started working for dog handlers as an apprentice. A love of dogs became a professional career, as he and his wife, Linda, work as professional handlers year round.

For Love of Cockers

Temperament and personality: These are the two traits Pitts says he loves about Cocker Spaniels. In the beginning at dog shows, he worked with everything from Cockers to Gordon Setters, and Afghan Hounds.

Linda, his wife, has shown Pulis for the past 15 years, with the number 2 show dog of 2017, Grand Champion, Preston The Puli ‘Cordmaker Mister Blue Sky’. He was the number one dog in the nation in 2016 and retired early in 2018, so he did not compete at this year’s Westminster Kennel Club Dog Show.

American Cocker Spaniels have four best in show wins, with the most earliest going back to 1921. Would this be a much overdue win for Team Striker?

During the showing of the Cockers at the Garden, WKC’s Gail Miller Bisher, shared on air, “You have a lot of coat in the show ring but you could certainly– if you wanted a Cocker Spaniel in your family, you don’t have to have as much coat at home. But it sure looks pretty.”

I can attest to that, as my Cocker, Dexter, maintains a sporty puppy cut, as I groom him myself.

What is it about Striker that stands out, I asked Pitts.

“Other than his conformation, Striker is one of those dogs that has the ‘it’ factor: He just goes and goes. He never gets tired, he is entertaining, and he really enjoys what he is doing,” Pitts reports.

Click this video to get a first-paw look at Striker’s reaction to winning the AKC National Championship. Cocker lovers will appreciate and muse at his personality:

Aside from his winning personality and perfect Cocker conformation, there’s more to this dog than striking beauty. Striker goes crazy when he sees or hears a toy. He loves liver but turns his nose up to hot dogs. Pitts goes so far as to say Striker loses his mind for a squeaky toy.

When asked if Striker actually likes competing, his behavior speaks for itself. Pitts reports that Striker screams from his kennel if he cannot go with him to shows. He likes to make his presence known both in the ring and off.

It’s all in the genes, as one of the litters Striker has thus far sired has produced a puppy that is already a multiple group winner. Pitts shares the puppies have that same Striker attitude and love for the ring as their dad. Conformation wise, he says they are all very beautiful. One of the dogs was a Winner’s dog at the recent National Specialty Club.

At Madison Square Garden, Pitts says he would do his best and have his dog in tip top shape, hope he stays well, performs, and then do a whole lot of praying.

In the show ring, only the winner of each of the seven group categories advances to compete for Best in Show.

What’s Next for Striker

This is Striker’s last show, as he is being retired. In addition to his Best in Show win at the AKC National Championship, in 2017 Striker won the Sporting Group 145 times and won Best in Show 42 times.

It’s safe to safe this wigglebutt with a heart of gold and attitude of a champion deserves some R&R.

I asked Pitts if dogs really like to show off in the ring and out put forth their best effort.

“I don’t make Striker do anything he doesn’t want to do,” he says. “He is very excited in the ring. As a handler or owner, you know when the dog doesn’t look the part any longer and when they get tired.”

For the Pitts duo, most of the dogs they show are younger, but Striker had to wait his turn at the age of six until they had time in their schedule to show him.

Sometimes, he will bring a dog back and show them in the Veterans category at the American Spaniel Club.

“You want people to remember them when they looked good,” he muses. “You stop showing a dog when they are at their best. You must use your judgment on that.”

Nose to Nose and Face to Face with Striker

I am a dog mom and Cocker Spaniel lover of the highest order to my core. Since most reading this feel the same way, we did some in-person recording and reporting with Striker. Here are our exclusive videos of the ASCOB showing at the Piers in New York City on February 13, 2018 and our photo series above with Striker.

Side Note: He smells like baby powder and is oh so snuggly!

Be sure to also check out our interview with one of the Cockers who competed at the Westminster 2018 Agility Sport. 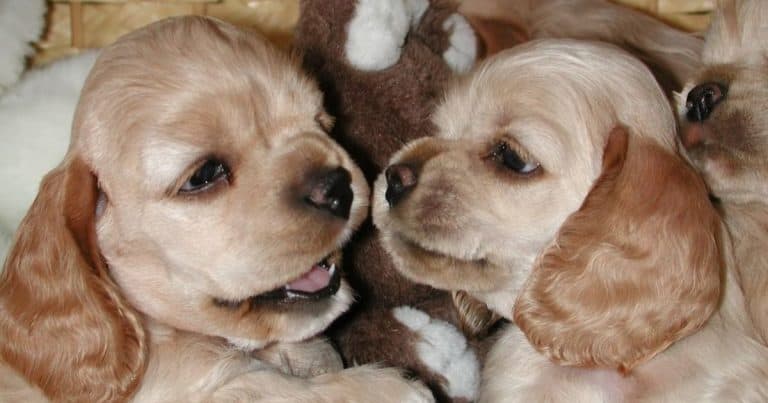 People who are allergic to dogs are generally reacting to their dander, not the hair or fur. If you are wondering are Cocker Spaniels hypoallergenic, the quick answer is no, with a catch…. 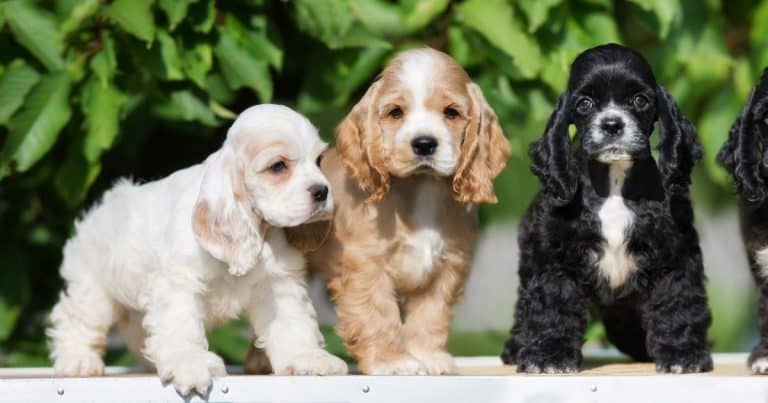 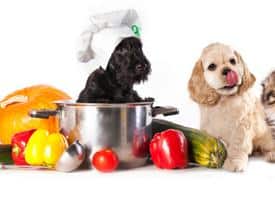 Yum, homemade banana dog treat time! When it comes to cooking, Carol Can’t Cook. I want to make healthy desserts to give my dog, but some things are just not meant to be….