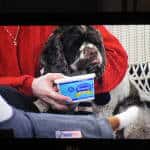 how to get your ex back This is my weekly column for Pet360 for Dog Appeal. Check out Fact Versus Fiction in Dog Food. “Old Mother Hubbard Went to the cupboard To get her poor dog a bone; But when she came there The cupboard was bare, And so the poor dog had none.” Old Mother Hubbard did not have the facts on what to feed her furry friend, but we know better so we … END_OF_DOCUMENT_TOKEN_TO_BE_REPLACED

I lost 40 pounds by gaining 25.  I got a dog  (all 25 pounds of her) and started walking and exercising with her. Within a few months, the weight came off and I felt a lot better. So my dog helped me lose 40 by gaining 25. It was the early 90s and working full time while going to college at night became my excuse/reason for gaining weight. The late night runs for fast food and … END_OF_DOCUMENT_TOKEN_TO_BE_REPLACED

Feed a dog grains and starches: It's the way evolution intended. That's not my mantra,  but according to a team of Swedish researchers, as wolves evolved into dogs, they learned to not only crave, but to exist, on eating things like wheat, corn, barley, and potatoes. According to the study published in the journal Nature and reported by the Washington Post, the findings support … END_OF_DOCUMENT_TOKEN_TO_BE_REPLACED

"What dog food does your dog eat?" I am asked this question quite frequently, and I am always happy to share what works for my dog in terms of the dog food he consumes. I feed my dog, Dexter, a combination of The Honest Kitchen Embark dog food, mixed with Dr. Harvey's Veg-to-Bowl, and I add some fresh cooked meat to it a few times a week. My last Cocker Spaniel was diagnosed at … END_OF_DOCUMENT_TOKEN_TO_BE_REPLACED

Looking to do something to help feed shelter dogs this holiday season but perhaps you can't adopt or foster? There are many ways to help pets in need and one dog food company has set the "bark" high. BOGO Bowl dog food was recently given a 4-star rating by Dog Food Advisor. They are also a company that lives the "give back" mantra. BOGO Bowl was started by Sara Henderson and … END_OF_DOCUMENT_TOKEN_TO_BE_REPLACED

Pet pantries are emerging in parts of the country to help feed family pets in need. Sara Henderson and Susan Holler applied a similar concept to shelters.  Sara knew she wanted to make the world a better place for animals -– she put that phrase on a "vision board" in 2008 –- and she started the process in 2009 when she founded the Pet Project Midwest. Her concept: Buy a bag of … END_OF_DOCUMENT_TOKEN_TO_BE_REPLACED

As a dog mom, one of my biggest concerns has always been “what should I feed my dog?”  Having had a dog with irritable bowel disease, I can attest to the havoc that can take hold on a dog’s digestive system with even the slightest diversion from a diet that works (the dreaded table scrap!). Complete nutrition starts with puppy food and works its way through the entire life span … END_OF_DOCUMENT_TOKEN_TO_BE_REPLACED

Want to help dogs in Alabama, Louisiana and Mississippi affected by Hurricane Isaac? One dog food company has stepped forward to help dogs in need who are now at risk because of Hurricane Isaac and its wrath of fury. Fidose of Reality fans can pitch in and help out, too. Here's how: BOGO Bowl normally operates their buy-one-give-one model to distribute food to animal shelters … END_OF_DOCUMENT_TOKEN_TO_BE_REPLACED

Dog food that is good for dogs, tastes yummy to them, and gives dog parents a sense of providing proper nutrition to them: Sounds like a wish list for dog moms and dads, right? Wishes sometimes come true, as we recently discovered with a new dog food (wet variety)to the marketplace. Rachael Ray Nutrish Naturally Delish is a wet food for dogs with no corn, wheat*, soy, or … END_OF_DOCUMENT_TOKEN_TO_BE_REPLACED

Do you know how to read a pet food label? Does the idea of knowing exactly what to feed your dog ever leave you feeling confused? If so, join the club. Even yours truly, who reads and writes about dogs, dog products, and dog nutrition, gets perplexed. It was with ardent fervor that I attended a seminar focusing on pet nutrition during a recent pet bloggers conference. The very … END_OF_DOCUMENT_TOKEN_TO_BE_REPLACED

Fidose of Reality, LLC is a participant in the Amazon Services LLC Associates Program, an affiliate advertising program designed to provide a means for us to earn fees by linking to Amazon.com and affiliated sites.