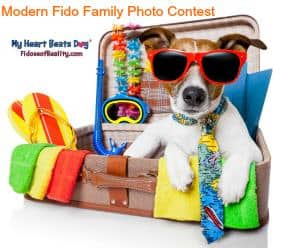 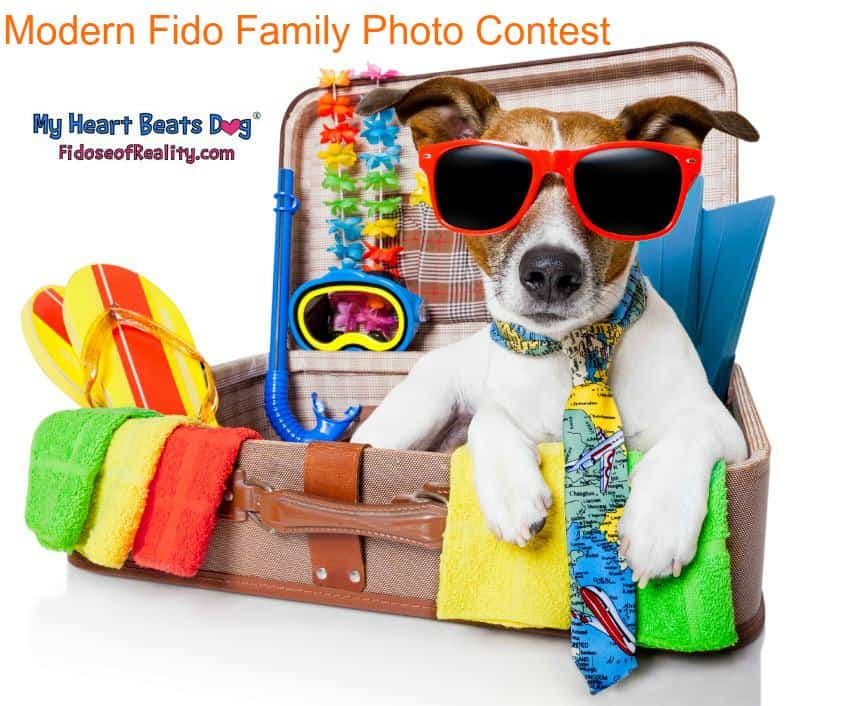 We’ve gone to the dogs as a nation, and Fidose of Reality is here to celebrate today’s Modern Fido with our first ever Modern Fido Family Photo Contest. Sixty-five percent of U.S. households, or about 79.7 million families, own a pet, according to the 2015-2016 National Pet Owners Survey conducted by the American Pet Products Association (APPA). This is up from 56 percent of U.S. households in 1988, the first year the survey was conducted. Of those nearly 80 million pet-owning families, 54.4 million of them are dog households!

The grand prize in this photo contest is a custom pair of PoochieBoots™ for dogs! We fell in love with these very unique protective dog boots when looking for something to protect our dog’s precious paws all winter long. Little did we know that the founder of PoochieBoots, Karyn Pek, is developing a breathable mesh for a summer option, too! Pavements and sand can get burning hot and it it’s too hot for us to walk on barefoot, then it’s too hot for the dogs too! 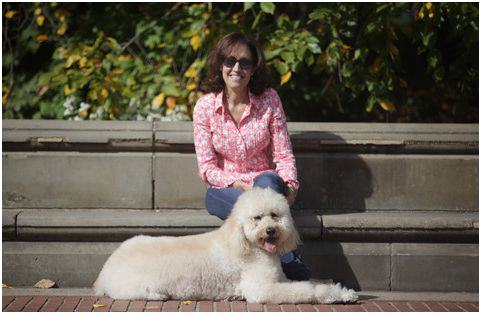 Everyone from tiny dogs to big dogs like a Leonberger can wear Poochieboots because they have “detachable, interchangeable, decorative” straps.  In fact, PoochieBoots are patent pending. 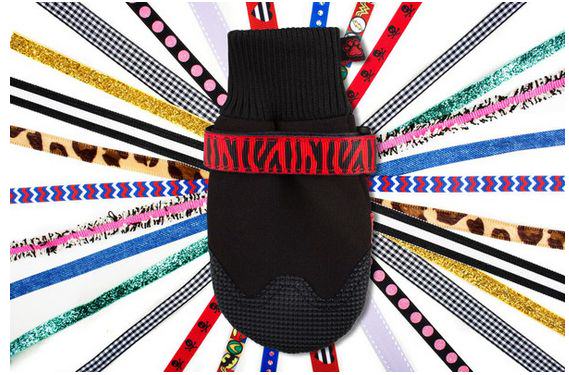 It took about 5 minutes for my dog to get used to wearing them. My dog is used to apparel and clothing. If your dog is not, you will want to start out slow. Maybe try putting one PoochieBoot on and letting the dog walk around for 2 minutes with one on. They will act like they are walking on broken glass. Praise, clap, and reward with treats. I had my dog run in his one Poochieboot and I threw the ball, his favorite toy. He forgot about it in seconds. Here’s Dexter getting used to one of the PoochieBoots on his paw. He is a size 4, by the way, and has a tried and true girthy American Cocker Spaniel paw. 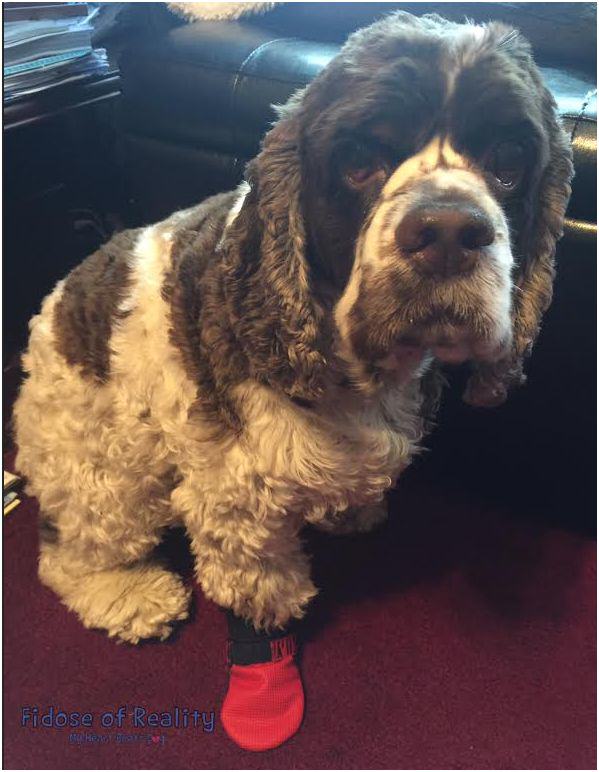 PoochieBoots are “patent pending”, says founder Karyn Pek.  All dogs are different on wear, but with proper care Poochieboots will last a number of seasons.  You can even put them in the washing machine. Remove the straps and place protective velcro (found in pouch pocket) over boot velcro to prevent cuffs from getting snagged

Even cooler, the straps are interchangeable. Look at some of the straps Dexter has: 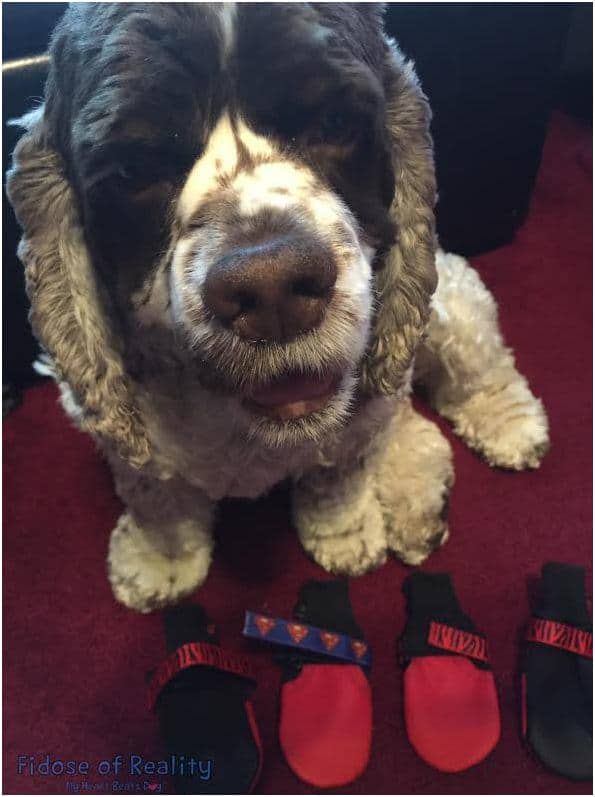 So now that you know all about PoochieBoots, hop on over for a pair and enter to win a pack of four, one for each paw, below. That is the grand prize! 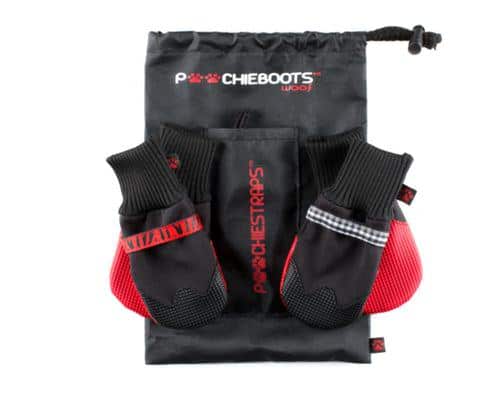 Of course, since this is a Modern Fido Family Photo Contest, we have more than one prize to give away. 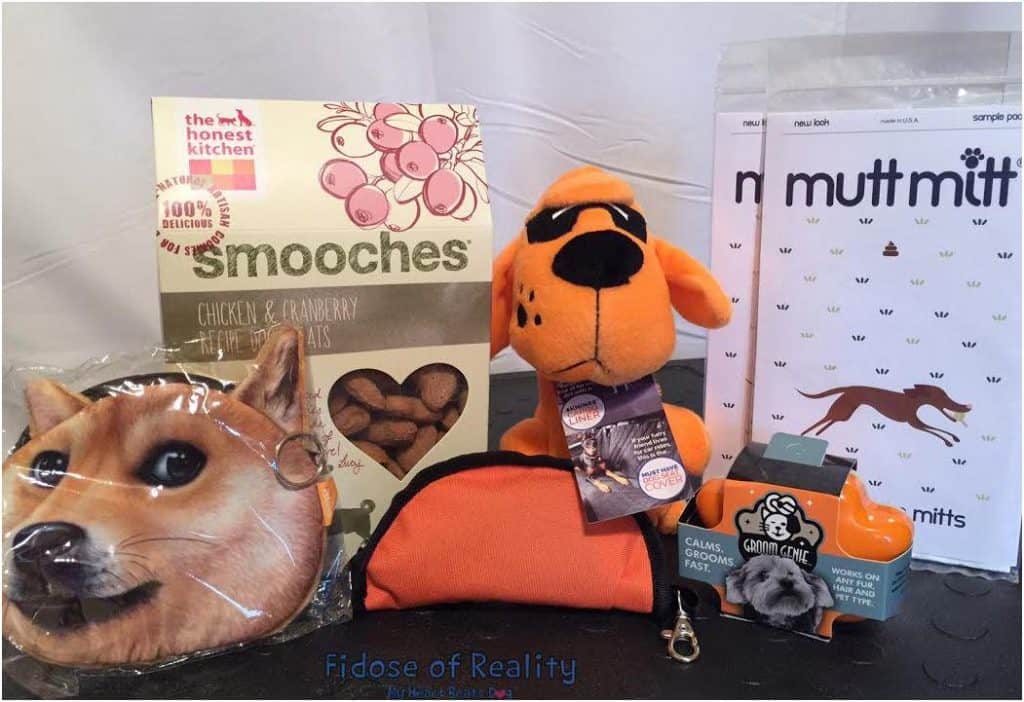 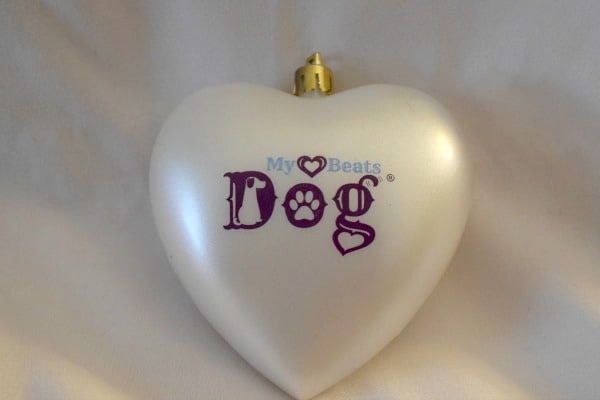 Fourth prize will win a My Heart Beats Dog pin and magnet set.

THE CONTEST IS CLOSED AND THE WINNERS ARE:

FIRST PLACE OF THE POOCHIEBOOTS: 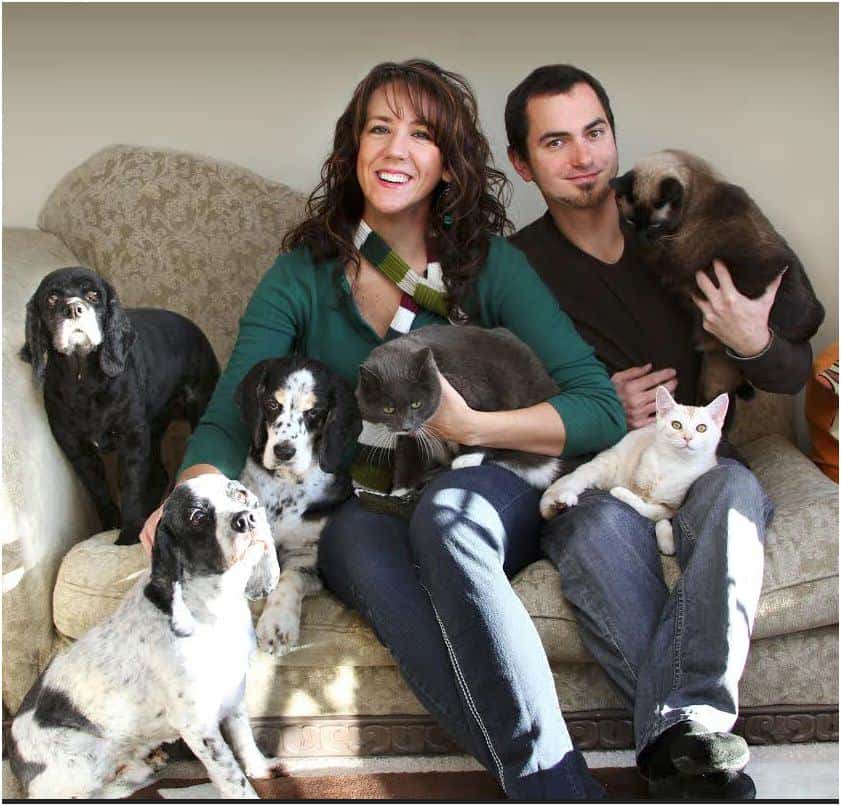 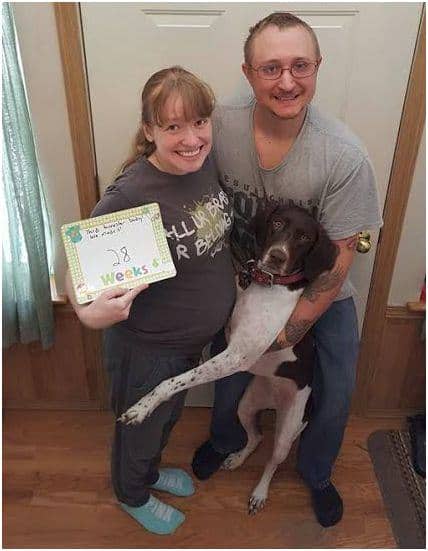 THIRD PLACE OF THE ORNAMENT: 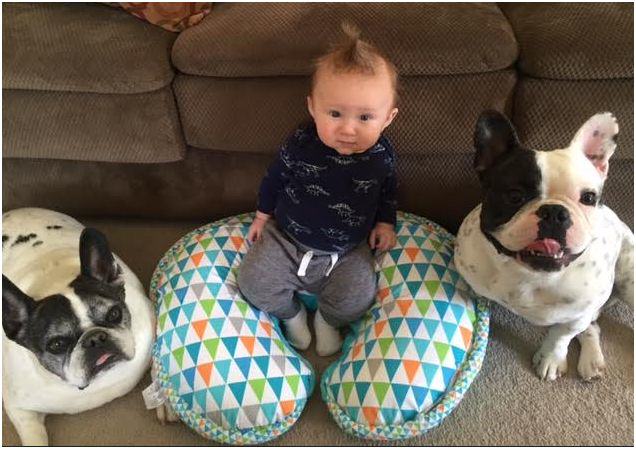 FOURTH PLACE OF THE MAGNET SET: 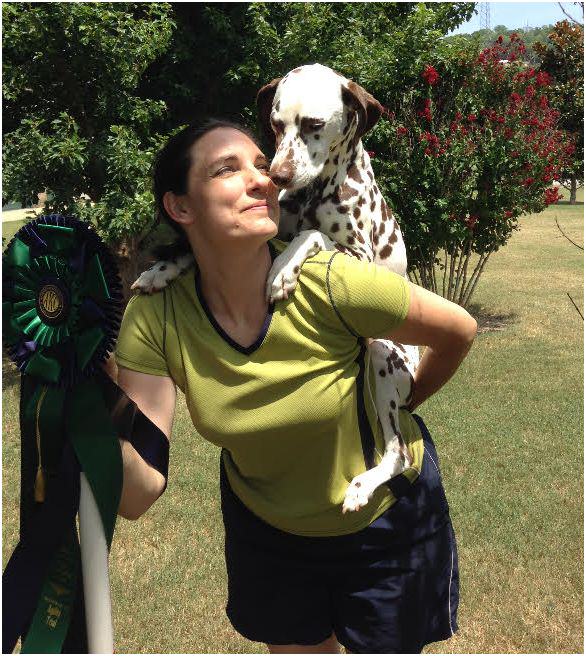 We want to see what your Modern Fido Family looks like. Families today come in all shapes, sizes, genders, and include dogs! Show us a photo of your family that includes the humans and your dog(s). That’s it! Two photos per person allowed. USA only on this one.

Contest starts NOW! Deadline to submit entries is 06/30/16 at 11:59 p.m. EST. Email your photos to: contests@fidoseofreality.com with the subject line Modern Fidose Family.

Please provide your name, city and state and the names of the dog(s) featured. Without this information, photos will be disqualified. Must include a dog and you agree to ownership of the photo. All photos will appear on the blog (and other social media) and by entering, you give Fidose of Reality permission to use the photo on the blog and for other purposes now and in the future. All entrants are added to our private mailing list and emails are never shared. We will respond in 48 hours that the photo was received.

What are we judged on? You will be judged on: 50% adherence to contest rules and photo contest theme and 50% overall photo appeal/clarity and originality to the theme of you and your dog(s) in love. The founder of Fidose of Reality is not a judge.

Can my friends and family play? Sure! The more the merrier. We love to see tails wagging here at Fidose of Reality, so spread the word and make your voice heard. Two photos per person, please.

What if I win? Winner will be notified and announced on the Fidose of Reality blog in this thread no later than July 4, 2016. Winner must provide name and mailing address so we can ship you the prizes. Winners have 48 hours to reply to notice they have won or another winner(s) will be selected.

Where Can I See My Photo? You will receive confirmation of photo received and all photos will appear on Fidose of Reality’s Facebook page in an album called “Modern Fido Family Photo Contest 2016.″

Note: We were not compensated for this contest. We did receive a complimentary pair of custom PoochieBoots to try.

Think about it: your dog spends most of his time at home, so he’s surrounded by whatever chemicals you use to clean it. If your dog has environmental allergies, those can be triggered… 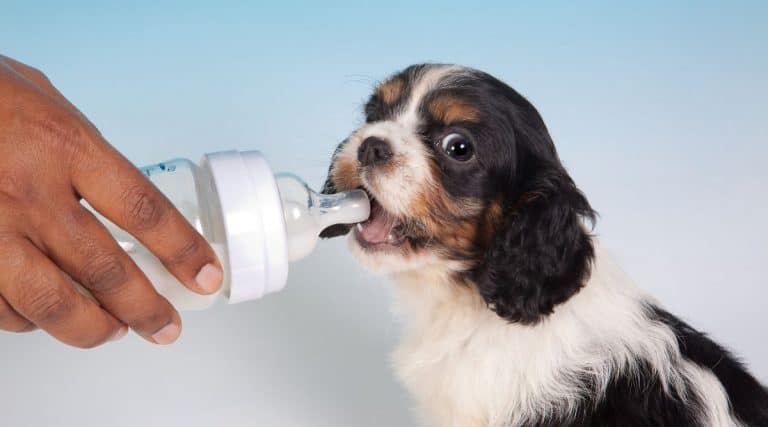 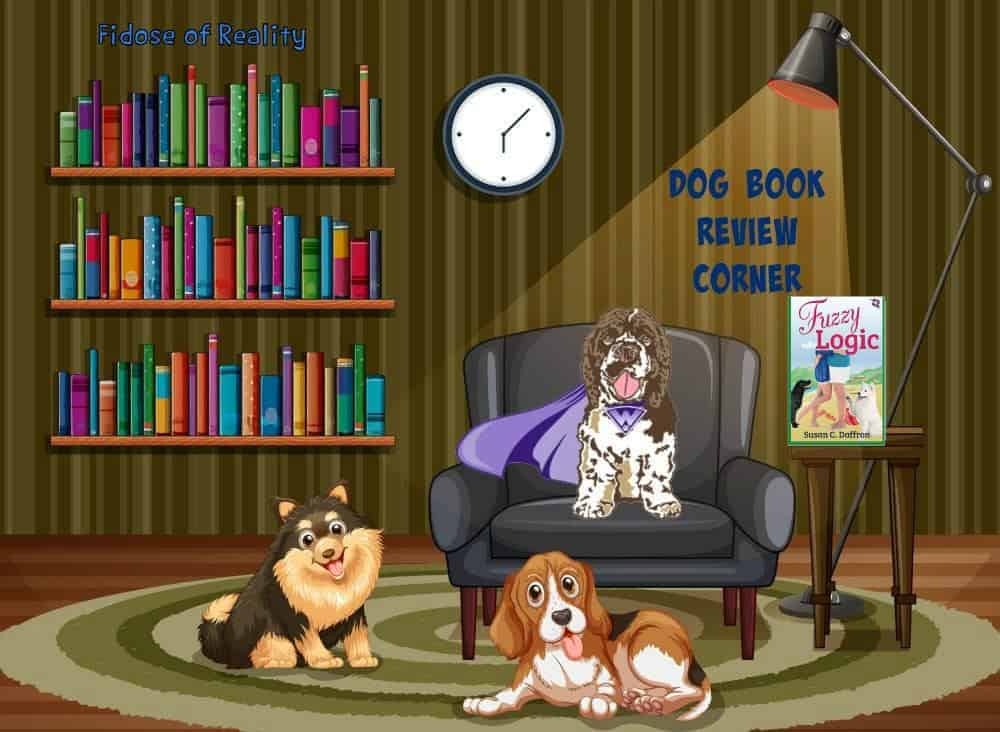 Chick lit with a canine twist: If this sounds like your cup of’ terrier tea, read on. When Susan Daffron was named a Fidose of Reality Paw-er Woman in 2011, she told us, “If you…