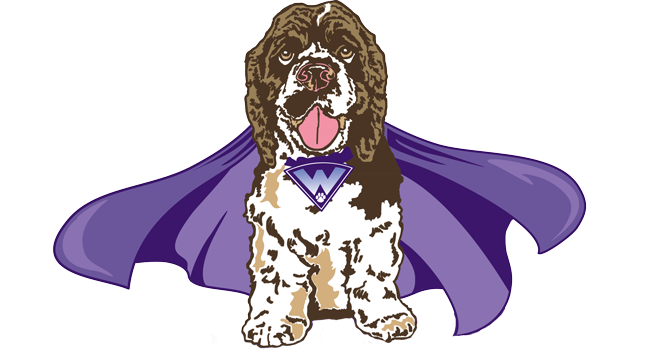 My neighbor’s dog has had a profound impact on the lives of my previous Cocker Spaniel and the one who currently shares my life. Can a dog really change your life? (I’ve been asked that a time or two). Pet adoptions can have far reaching impact.

Zola is a rescue dog, who came with the name Zyla Cocoa. Apparently she was a drug bust dog: The people who kept her were doing drugs, got busted and she was seized as part of the “property.” This also meant the drugs went to the police station and Zyla Cocoa went to the humane society.

In a small town about an hour away, a girl was getting her dog ready for a Halloween costume contest to benefit that very same Humane Society. She’d dress her dog as a lion that year: A mane to show how proud she was of her runt of a Cocker Spaniel. That girl was me and the dog was Brandy Noel, my senior dog who never lost her zest for life until the day she crossed to the bridge. 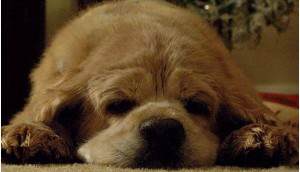 Funny how life’s roads lead you where you need to go. PetSmart didn’t have a dress-up contest that Halloween, for whatever reason, so we found this Humane Society that did have one. We do it for the fun, I love to mingle with the other dogs and ask owners where they got the inspiration for a costume. This is my idea of grown up adult fun. Brandy entered the parade and Zyla Cocoa was the “please adopt me” dog being “paraded” around. My friend, who decided to come at the last minute, did a double take at the dog with the funny name. My friend thought about adopting a dog for a while but just never got around to it. And now the moment presented itself.  I never got to see the moment when their eyes locked, as I was too busy parading my princess around with the other costume-laden pooches. But my friend fell in love and the papers were signed. Zyla Cocoa would eventually come home with my friend to start her new life.

My friend changed her new dog’s name to Zola, a more fitting name for such a stately muttigree, and with proper training, lots of love, and plenty of reassurance that she had found her forever home, Zola and my Brandy bonded. When the day came that Brandy would pass from this world, one week shy of 15 years old, I promised myself, “never again.” I would never again allow myself to get this close to a dog.

And then came Dexter. He found me, his little head looking out of a pumpkin. “Someone, please come get me.” I had electric shocks meander down my spine. I knew he had to be mine. And he was. And he is. My “never again” sits at my feet, carrying the legacy of love instilled by his predecessor. His name is Dexter and he reminds me I could never not love this way again.

We all should be so blessed and so fortunate to experience the love of a dog. They give so totally, so freely, and yes many come with baggage. Isn’t something good that is totally worth having worth helping to dump their baggage and replace it with new memories? Dogs in shelters end up there for a variety of reasons: They just need someone to show them not all people are horrible or neglectful. Some end up in shelters simply because people have no time for them, a new baby comes along, or any number of reasons.

I’ve heard time and again that some folks just cannot afford to pay the adoption fee that comes with rescuing a dog (or cat or other pet) from a shelter.

Enter Maddies Pet Adoption Days taking place this June in New York City. Hold onto your hats because all adoption fees will be waived. The event in New York City is being “Presented by the Mayor’s Alliance” (a consortium of NY area shelters and rescues).  While the adoptions are free of charge, all standard pre-qualification and pre-screenings are still in place, in other words,  “free adoptions to qualified homes.”

Maddie’s Pet Adoption Days has been a local free pet adoption weekend in California for the last three years. This is the first time it’s going national the weekend of June 1st and 2nd, and one of the cities participating is New York City making it “New York Cities Largest Adoption Event” to date! 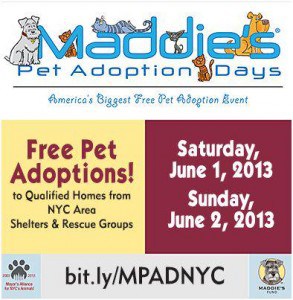 In the past, the event has been successful in driving adoption both pets with medically treatable conditions and senior pets. If all goes as planned and those of you who want to bring a forever love into your life for free, then the goal to to save over 1,000 lives that weekend can be attained. The Mayor’s Alliance of New York City Presents the first ever Maddie’s Fund Pet Adoption Weekend June 1st and 2nd which will be the largest adoption event in the New York City area ever!!!

Come out and be a part of it and tell your fur-ends and family members who need a little nudge to get started on a forever love. My friend, Ellen, needed a nudge and my Brandy gave her one.

Zola now counts my Dexter as her BFF (best furry friend) and they wrestle, play, and love to hang out together. I am grateful for the presence of Zola in our lives, and I look forward to helping others find their canine soulmates.

Note: Maddie’s Fund is also holding similar events at several other cities in the US on the same weekend. If you aren’t in New York, you can still paw-ticipate!! Free best friends!