The greatest miracles in life often come in a form, shape, and a time we least expect them. And if we’re fortunate and perhaps lucky enough, they’ll even appear twice.

While driving home from a Fido-friendly vacation in Maine, I decided to stop and visit my friend Arlene, who then lived  in a small town in Connecticut. A bit of a brief background on Arlene: We met around 17 years ago through an article in a now-defunct dog magazine. Her puppy was going blind and the magazine detailed her story and the puppy’s plight. I wanted to donate to her pup so that perhaps a university could save the dog’s sight. Unfortunately, this was not meant to be and her lab mix went blind. Arlene and I became friends via the then written letter.

We wrote to each other at least monthly via snail mail, as the internet hadn’t taken hold yet. We became friends through our dogs. I was the proud mom of Brandy, a runt of a Cocker Spaniel who rescued me as much as I rescued her from a puppy mill. Brandy and Arlene’s dog, Little Bit, grew up together. We’d share stories and triumphs, sadness and health issues, and our dogs were the reason we knew each other and formed this friendship. We did eventually meet, and Little Bit, even without vision, was able to sniff Brandy out and they became buddies, too.

As with all amazing things in life, there is a beginning, and so too, there shall be an end. In the fall of 2007, Little Bit succumbed to a neurological disorder, and the Rainbow Bridge called him home. In October of 2008, Brandy succumbed to intestinal disease, and my heart was shattered. Since their passings, Arlene and I had been unable to get together. One thing or another always got in the way…. Life just happened.

Well, on Friday, June 26, 2009, we decided enough time had passed and it was the right moment to meet up and give hugs, talk about old times, and for Arlene to meet my baby boy, Dexter, who entered my life and stole my heart in the fall of 2008. This would be the first time we saw each other since our dogs were alive.

One of the things Arlene and I had been talking about recently was how we wish our deceased dogs would give us a sign that they were okay, that they are happy and they are watching over us.

My travel partner and I  decided that instead of driving the winding back road to Arlene’s house in Connecticut in the pouring rain, instead we would all meet at a rest stop. The rain was so heavy, the sky was very dark, and driving conditions were difficult. We met at a nearby truck stop, stood outside under cover, and caught up, laughed, hugged, and Dexter got to meet his Auntie. It was all very sweet. We told each other how it was so special that our dogs brought us together and that Dexter now is the tie that binds.

Suddenly, there was wicked lightning in the sky and we darted for cover into Arlene’s car. We all sat there and chatted for an hour. Moments before we exited the car to head for our vehicle, the skies got lighter, the rain SUDDENLY stopped, and the skies calmed. We stood outside the car saying our goodbyes when the most amazing thing happened.

A rainbow appeared in the sky right in front of us. The biggest, brightest rainbow I had ever seen. It was as if a child took a bright magic marker set and colored this rainbow into the sky. It kept getting brighter and brighter. The truck stop became a magical gathering of sorts, with people getting out of their cars to take pictures and gaze at this awe-inspiring rainbow. Well what happened next is really special. 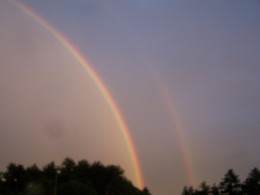 A second rainbow appeared right next to the first one. It got brighter and brighter right in front of our eyes. The skies got brighter and so did the colors and hues of the two rainbows. We just cried. We took pictures and I had my video camera handy, so I shot a few seconds as the second rainbow was taking form. Well, as we got into our respective cars to drive the long trek home, the rainbows disappeared and the rain started again, slowly but present. We couldn’t believe it. I have never had something like this happen to me, and I have never seen a double rainbow before.

I firmly believe our dogs were present with us from the Rainbow Bridge and this was their way of contacting us and say they are okay, with a blessing over my new pooch, Dexter. I know some will think I am reading into this, but the timing of it all, the way the rain stopped, the sky cleared, and that not one but TWO rainbows appeared, really was nothing short of a miracle to us. I will cherish this memory always and feel blessed for having experienced it.

For those of you who have lost furbabies, let me say this: Watch for signs and expect them unexpectedly. They are there. Love is eternal and never ends. I’ve got my Rainbow Connection.

Learn more about Arlene in her first book, Broken Spokes, available from Amazon.com.